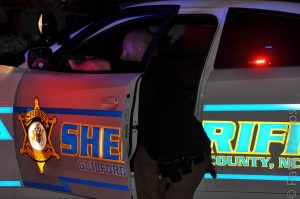 Arrests are rarely neat and tidy, or take place with little resistance from the suspect(s). If the charge is for a misdemeanor, too many parking tickets, or a problem with overdue child support, the suspect might cooperate. But, hardly anybody actually wants to go to jail.

If a car is seen weaving across lanes on a busy road, an officer might have cause to assume that something is wrong. Drunk driver? Distracted driver swatting at a bee in the car? Texting driver? Any of these scenarios require the officer to be on the alert, but might not require an automatic call for backup. He/she is facing what is called an Unknown Risk. The officer will follow protocol and call in the plate number or use his onboard computer to research outstanding warrants and ownership of the car. If flashing the patrol car light bar gets the driver to pull over so that the officer can investigate the reason for the odd behavior, then the stop may just end with a warning or a ticket.

Sometimes suspects are caught in the act of a committing a felony and they try to make a run for it (perhaps after a bank robbery or a drug deal goes south) hoping they can lose the cops in traffic or on deserted back roads. “Suspect fleeing the scene,” may be called in if it’s witnessed, and officers in pursuit are facing a Known Risk. It becomes a High Risk situation if guns are involved. The chase can continue beyond city limits, as long as it is an active pursuit.

Once the chase ends, the officers need to control the situation as much as possible, keeping their own position and the suspect’s position clearly in mind at all times.

If the chase ends during the daytime, the officer will angle the patrol cars to block off streets and people for their own protection, getting as close as possible to the suspects to control the developing situation.

You give up cover if you are not positioned behind a door, so the officers will try to stay behind a car door while the scene unfolds. Bullets will pierce doors, but at least a car door will slow the bullet down. Hopefully, the officers will be wearing bulletproof vests, but even a notebook will slow down a bullet, although not by much. There are degrees of cover and there are very few times of absolute cover. 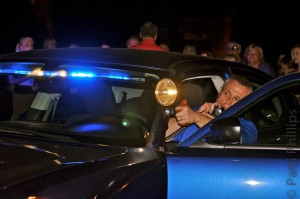 At night, the officers will create a curtain of light – that is, shine lights on the suspect’s face so that he/she can’t see the officers. 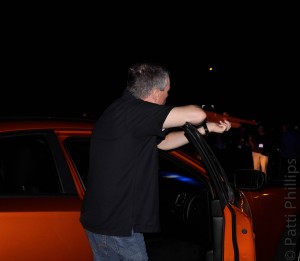 Officers in patrol cars generally carry a shotgun because it commands respect. People pretty much stop in their tracks when they hear the sound of a shotgun being racked.

It is essential to get as much information about the people inside the car as possible, before any further action is taken. If there are tinted windows in the car, the officer will try to talk the people out. If the officer can’t? Then, officers are trained to wait the suspects out. It’s usually only a matter of time before the occupants of the car will make a move.

Officers will risk the K-9s if they need to, in order to encourage the suspects to get out of the car or even to stay put.

If the officer feels the trunk needs to be investigated, he/she will have the suspect pop the trunk so that the officer maintains control. 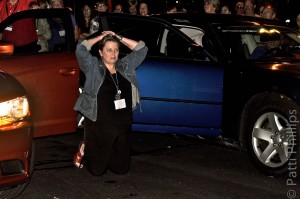 Once the suspect gets out of the car, the officer will have him/her kneel or lie on the ground to be cuffed. 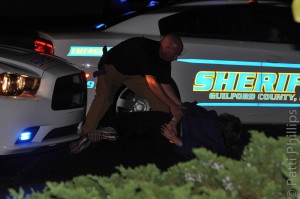 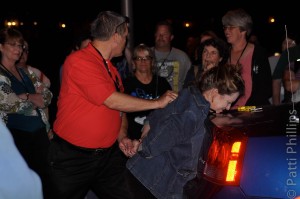 The suspect needs to be frisked before being placed in the patrol car. 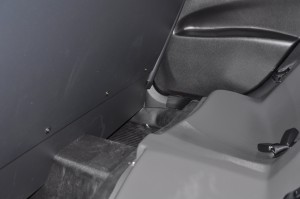 The inside of a patrol car is bare bones for a reason. Suspects are often sick inside the patrol car, or even go to the bathroom in there. Yup, right in the back seat. This plain design makes it easier to hose out and also cuts down on places to hide sharp objects, etc. 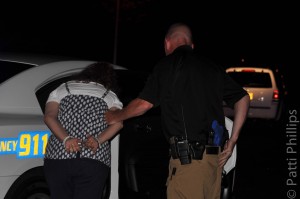 Once the suspects have been cuffed and frisked, the officer places them inside the patrol car.

There were no guns in the hands of the suspects in this scenario, so the situation was handled fairly easily and was resolved in about an hour.

Please Note: none of the gals in the photos are criminals. They were attendees at the 2013 Writers’ Police Academy and were helping to re-enact a ‘Known Risk’ stop, complete with yelling and back-talk to the officers. Good sports, all!  🙂

Many thanks to the instructors at The Writers’ Police Academy (2013) and the volunteers from the Guilford County Sheriff’s Department (NC) who gave so generously of their time during their days off.

The re-enactment was conducted at night and demonstrated how difficult it is for anyone to see what’s happening (officers or suspects) while the action unfolds. After I took the photos, I used a photo correction app to adjust the lighting, so that you could see the positions of the people and the cars.

Compare the two versions of the same image below.

#1 (the original image) shows how dark it really was outside.

#2 was adjusted so that you can see the demo. 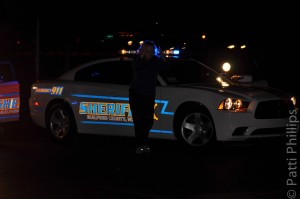 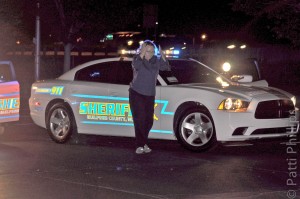