Criminals that tie their victims up during the commission of a crime frequently use duct tape for the job. That duct tape is almost always full of prints that get embedded into the tape. It’s practically impossible to manipulate and tear the tape while wearing gloves (I tried this once and the gloves got so stuck to the tape that I threw the resulting mess away), so the crook leaves prints while unrolling and tearing the tape. Even if he has wiped the smooth surface of the tape clean to cover his identity, the sticky side can’t be wiped without taking away the sticky. Balls of tape tossed aside by a suspect have been processed successfully for prints, but first the tape had to be released from itself.

What to do? Drop lots of a 2% chloroform tape release agent on the area where the two pieces of tape meet. Two people need to work together on this – one person places the drops continuously while the other person pulls the tape apart. The ends of the tape should then be folded over (about ¼”) and the tape flattened for 24 hours before doing anything else to it.

After 24 hours, adhesive-side developer should be applied to the sticky side of the duct tape, allowed to sit for a few minutes, then rinsed off. The prints are clearly visible, can be photographed, covered with clear tape to protect them, viewed under an Optical Comparator, entered into the system, and sent off to AFIS.

Up until recently, we could not collect decent prints from the dashboard of a getaway car in a reasonable length of time. Most car and truck dashboards have a slightly bumpy surface, more or less because it’s a selling point to non-criminal types – supposedly the pebbled surfaces mean no more pesky fingerprints to clean off if you’re a mom transporting kids after school. Sheila says the juice spills just get buried in the grooves.

But, it’s a potential fingerprint heaven for the CSIs who need to process the abandoned bank heist car. Think about it. If you press your hand onto a dashboard, your skin (with all the loops and whorls and arches and oils) is also pressing into the crevices of the pebbled surface. The problem is that a straight gel lift or hinge lifter will not pick up the prints effectively or may only pick up the top of the print.

But, the investigator sees the possible print and doesn’t want to lose the opportunity to catch the crook. The answer in the past was to dust the likely area with magnetic fingerprint powder, then apply a Blue Glue gel and wait for the gel to cure before lifting it off the dash – about five hours. FIVE hours? The crook is getting away! No time to wait!

These days, the preferred lifting product (after applying the magnetic powder to enhance the print) is a transparent liquid silicone (PVS200 – polyvinyl siloxane), applied with an extruder gun. It flows down into the crevices, dries in six minutes, and gets into every bit of the print. After the polyvinyl dries, it can be lifted, and then placed on a backing card to preserve the print. At that point, it can be placed under an Optical Comparator, photographed, and sent off to AFIS for an ID/comparison.

This epoxy is not good for every surface (it rips paper, etc) but is very good for pitted, bumpy surfaces like alligator skin and dashboards. Gotcha!

Planning to become a crime scene investigator? Then remember to collect the balls of duct tape tossed on the floor or in the garbage cans at the crime scene. Almost definitely, a great source for prints. And don’t forget your extruder gun!

*Photos taken by Patti Phillips at the Sirchie Education and Training facility in Youngsville, NC.

For more information about Sirchie and its products for the law enforcement community, please visit www.Sirchie.com. 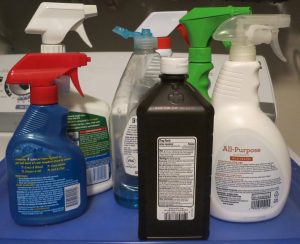 Sheila and I have been watching an Australian murder/mystery series that recently included poison as a method of getting rid of one of the characters. An interesting case that hinged on who had access to the poison in question.

Mystery writers quite often use poison as a way to dispatch the victims in their books. Famed Agatha Christie used poison in several of her 66 novels, on 30 victims. Christie’s choices were based on what she needed to happen in the plot; did the poison have to be fast-acting or was it important to give the killer time to get away?

In “What poisons were in Agatha Christie’s books?” I listed a few of her favorite dastardly tools of death, but one of the critical aspects of choosing the correct one was its availability to the murderer.  🙂

Arsenic, belladonna, cyanide, etc. may be handy for a pharmacist or a chemist or a doctor, as in the Australian show, but what about the ordinary gal (poison is traditionally a woman’s choice) who wants to do somebody in? It’s not as if a housewife would normally have access to cyanide. Some medications would make you woozy or extremely nauseous if you overdosed, but over-the-counter meds are rarely going to kill someone unless a bucketful is consumed – unless an allergy is involved. There are some exceptions to that, but most will not do the job without some devious planning and execution.

So, what is a revenge-focused lay person to do? Assuming of course, that the fictional person is motivated, would have the guts to actually kill someone, and is not squeamish about the cleanup. Dead bodies are messy and hard to drag around.

We all have cleaning supplies readily available in the house or garage, so let’s take a look.

Bleach This is a fairly common household item used to remove stains from clothing or to kill surface bacteria. It’s well-known to be powerful as a cleaning agent and once upon a time, I poured too much into the machine when I was helping Sheila with the white wash. The shirts basically disintegrated and the ones that didn’t, smelled of bleach forever after. It would be impossible to get this smell past a victim’s nose, so it couldn’t be used in any subtle way.

Ammonia is often used to clean windows and is contained in many popular products in a diluted form. The ammonia smell is distinctive and too strong to be pleasant without perfume additives. Used straight out of the ammonia vat? It would burn the skin off your hands while you pass out from the fumes.

Remember, our housewife wants to get away with murder, not die while she’s carrying out the dastardly deed.

BUT, when these two cleaners (even diluted in the pleasantly scented store products) are mixed together they produce a lethal chlorine gas. If the products have been poured into non-descript spray bottles, the scenario might be to ‘accidentally’ mix up the labels and get the potential victim to help with cleaning after a messy spill in a closed space while the housewife leaves the room. The trick would be to switch the labels back before the cops arrive. Variations of this smelly method might involve cleaning a toilet with one of the clear liquids already in the toilet. After adding the other liquid, the noxious gas would suddenly waft upward toward the victim’s face.

Hydrogen peroxide is used as an anti-bacterial agent and some people even use it when gargling or for cleaning small cuts or abrasions.

White vinegar is used in cooking and in many restaurants as a gentle, yet effective, solution for shining the stainless steel.

BUT, when hydrogen peroxide and vinegar are mixed together, they create an acid, which can be quite harmful to the lungs. Harmful, but not necessarily deadly in small quantities.

Dishwasher detergents contain chlorine in highly concentrated amounts, but it’s hard to imagine how you could get an adult to ingest detergent willingly. Perhaps mixed in food? I wonder if it would foam while cooking…

Air Fresheners – Most air fresheners include formaldehyde which interferes with your ability to smell and phenol which can cause convulsions, coma, and even death in high enough concentrations and quantities. However, this amount would also kill our housewife while she worked with it.

Oven Cleaner contains lye (sodium hydroxide). A little bit of lye is used in old-fashioned soap compounds; too much of the stuff can dissolve skin off the bone.

Our housewife might just be better off to find out what food her victim is allergic to, then mix that with a tasty treat to be served at the next get-together. The invitation could read:
“Tea at 4pm. Body Doggie bags will be provided.”

The next time you look at the warning labels on the cleaning products, keep these real-life guidelines in mind:

DANGER: can be fatal if swallowed. Less than a teaspoon could kill a 150-pound adult.

WARNING: is harmful if swallowed, and drinking less than an ounce could kill an average sized adult.

CAUTION: is harmful if swallowed, and it would take anywhere from an ounce to a pint to kill an average adult.

*Please note: this article is posted for entertainment purposes only.