We owe many of our Halloween celebrations to the Irish and Scottish immigrants who arrived in the United States in the 1800s. For centuries in England, it was the custom to travel from house to house dressed in scary outfits, asking for food in order to keep the goblins from doing mischief.

When I was in elementary school, my dad told us to repeat the phrase “Trick or treat?” and be prepared to demonstrate a trick if asked. Imagine my shock when I was actually asked to perform my trick by a neighbor who knew my dad and had recognized me in my pirate costume. Over the years, ‘cabbage night’ was added to the Halloween events. Cabbage night played out on the night before Halloween as a way for the local high schoolers to prank the neighbors. Toilet paper was sometimes involved, along with chalk, soap, and eggs. One year, the local grocery store refused to sell eggs to anyone under 21. Somebody had too many broken eggshells to clean up and protested to the unsuspecting suppliers.

Somewhere along the way, adults decided that if the kids could have parties, why couldn’t grownups do it as well, but instead, substitute hard apple cider for the kiddy stuff. But, as the adult parties grew in popularity, so did the size of the parties and the mischief that invariably comes with big crowds.

In 2019, the NY Post reported that there were only 21 days in 2018 that saw more crime reports than Halloween. That night, there were 277 cases of petty theft and numerous cases of people damaging graves and creating graffiti around the city.

In a suburb of Chicago in 2021, two people were killed and 12 more were injured when men with guns opened fire on a late-night costume party with almost 200 guests in attendance. It was one of at least 11 mass shootings (four or more dead – not including the shooter) in the US over that holiday weekend. In Albuquerque, New Mexico, police reported two dead and four injured during another Halloween shooting.

How do we keep the kids safe?

Some police departments recommend that children trick-or-treat between the hours of 6 and 8 p.m. Check the other safety suggestions listed below:

In this post-pandemic world, more children will be out and about on Halloween, hopefully with parents somewhere close. In 2021, our neighborhood had crowds of people during the fave hour from 7pm to 8pm. The parents dressed up as well and sometimes a family theme was evident. Great fun for everyone. 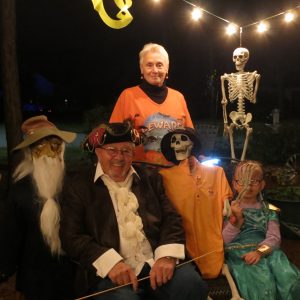 Be safe and enjoy!

If this article has no paragraph separations, please double-click on the title. That will create a more readable version. 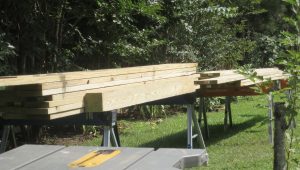 It’s taken a full year to find a builder that specializes in decks, could fit us into his schedule, and then actually show up to give us an estimate.

We found this guy through an accidental meeting. Months of calling builders listed in the various go-to ‘find your trusted builder here’ sites, following up on referrals from friends, crossing off names of companies that had provided less than satisfactory service (I wondered what was buried beneath one of those lumpy looking new decks in photos of work shared on the internet). We talked about somehow doing it ourselves, knowing that it would take all the weekends into the next millennium.

We were driving through a mall parking lot when we saw a large black van pull up to the curb near us. On the side, in large white letters, said DECKS. I slammed on the brakes, turned the car around, and pulled up next to the van. I jumped out of the car and practically tackled the guy as he got out.

He was startled, but after listening to our tale of woe, gave me his card and told me to call him. I made that call early the next day. He arrived at the house a few days later to assess the damage and discuss what he could do. The deck gods were kind and had delivered a nice young man, experienced in the ways of all things deck. He showed us photos of other jobs, and emailed an estimate. Sticker shock. Almost double what had been the norm just three years before. But we needed the deck replaced. A confluence of events during the Pandemic had created a rotting deck with normal maintenance impossible, and we were desperate.

In prep for the arrival of his crew some two months later, we needed to remove shrubs and bushes that surrounded the deck and ramp leading up to it. Digging next to a structure for days in a row let me get a close look at the underlying structure that would be replaced. Total tear-down was necessary. Previous repairs had left the support system in place, but that would not be possible now. Everything had to go, beams, railings, everything. One of the bushes had grown to fifteen feet tall and has to be cut back each year to allow access to the ramp. It’s a haven for birds all year round, but is loaded with inch long thorns that will rip your skin to shreds if you get too close. While I couldn’t move it, I could certainly cut it back to make a safer work site. Cut it back, cover the remaining six feet tall multiple trunks, with a tarp. There was no need to have bloody workers.

But, you know me. I began to think of other safety concerns. I looked up the stats at the National Institute for Occupational Safety and Health (NOISH) and saw that in 2019 there were 11 million construction workers on the official books of licensed contractors. Who knows how many unofficial ones there are? I was stunned at how many fatalities there are on the job with licensed contractors and fully permitted sites.

A concerning bit of information: “Small employers with fewer than 20 employees accounted for 75% of fatal falls between 2015 and 2017, even though they made up only 39% of construction payroll employment.” * More recent numbers were not available at this writing.

Our deck was only two feet off the ground, so nobody was worried about injuries due to falls. During construction, nobody was struck by anything, or electrocuted, or caught between deck boards. The only danger our work crew faced was dehydration from the heat, and we provided them with a cooler full of ice and water, and chairs to sit in the shady area of the backyard.

But not everyone works at a site that protected. A family friend died a number of years ago in a fall ten feet from the ground. He became a construction worker after September 11th, a casualty of Wall Street downsizing. He found a job with a private contractor and for the most part, found the work satisfying and safe. He did express concern to his co-workers and friends about the safety protocols in place at the job site where he died, but tragically, was ignored.

The guys that redid our roof wore safety harnesses while nailing down the new shingles or delivering materials to the other workers. There are nail guns involved in any modern day construction, but any workers that show up at our house handle their tools responsibly.

*The Kerrians are fictional characters, but the friend mentioned in this post did pass away in 2002, from a fall on the job. His neck snapped when he hit the ground and he died instantly.

*Stats from the U.S. Department of Health & Human Services 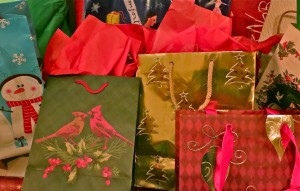 ‘Tis the season for shopping, shopping, and more shopping! Even with Black Friday, online stores, the Pandemic, and Cyber Monday thrown into the mix, the malls are still more crowded at this time of year than at any other. The Pandemic slowed things down a bit last year, but the crowds are back this year, masked in most areas, but unmasked in some.

Wait 30 minutes for a cold cup of coffee in the mall, crowded.

Unfortunately with the crowds, come a few pickpockets and pocketbook snatchers and package thieves. So, what can you do to cut down on the chances of getting robbed after you’ve slaved at your job to earn the Christmas money? Here are a few easy tips.

About those cellphones. Most people I know carry their cellphones with them everywhere. Did you know that the phone can be cloned by the new tech thieves? If someone is walking near you for too long – zig-zagging in step with you around the food court or through a big store – turn the phone off and change your direction. It only take a minute of close proximity to copy your entire phone contents. That means photos, texts, contact information, credit card info, etc.

You’re done shopping and you’re home. What should you do to reduce the chances of getting burglarized?

Above all, use common sense, stay safe, and enjoy the holidays!