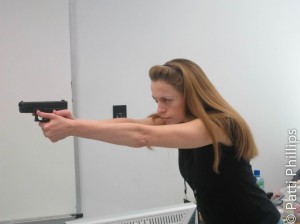 We’ve all seen TV shows and movies where nobody (good guy or bad) can hit the broad side of a barn. After a gazillion rounds, not one single bullet has connected with the intended targets and the only thing hurt is the house/car/fruit stand between the shooter and the person they were supposedly trying to hit. The typical viewer conclusion is that the cops are bad shots or that the script is meant to be a comedy.

Guess what? It’s not as easy to shoot on target as you might think.

I’m a decent shot with my S & W snubnose .38 personal revolver and my Glock service piece when I’m at the firing range, standing still facing a suspect straight on, or when crouched behind the cruiser, but I’ve never had to shoot at anybody on the run. And, not a large percentage of real-life law enforcement officers outside metropolitan areas do either. I’ve been told there are some police officers that have never fired their department issued guns their entire careers.

Back in the 1980s, the FBI did a study about gunfights. They found that most shootings were under three yards, lasted about three seconds, involved three or less rounds (bullets), and the hits? About 20% on target.

For the guys and gals who want to work in the larger towns and cities, practice is the only way to make sure that the guns can be relied upon to do their jobs. Sessions at the range are required only three or four times a year in most communities, but instructors are usually available for refresher tips and the department pays for the ammo. However, if I want to visit the range more often – once a month to stay as proficient as the drug dealers I might go up against – I pay for my own ammo. It varies, but ammo for my .38 revolver costs between 50 cents and a buck a bullet unless I can get a deal.

But, even a top shot needs more training than shooting at a bulls-eye type target and learning deadly force policy. It’s not enough to be able to shoot the gun in a quiet, controlled setting. Police academies are now including Meggitt FATS (Firearms Training Simulator) or Meggitt training, as a safe way to place officers (and civilians) in scenarios that mimic real life. Interactive videos might include shooting in a crowded mall, deciding whether a twelve year old getting out of a vehicle is armed and dangerous, choosing which of two similar looking women is a fleeing suspect with a gun…and the copied-from-actual-cases list goes on.

The first time I tried the simulator, I was so distracted by the people who were in motion in the scene that I shot a file cabinet. Dead. My instructor didn’t laugh, because while I was busy shooting office furniture and wasting rounds, the ‘suspect’ got away. 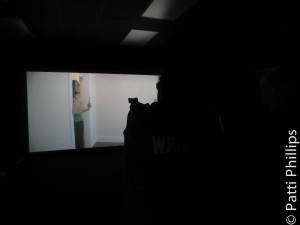 A few of the areas covered during the best refresher training:

2)   shooting while moving to cover

6)   what to do when the gun malfunctions while under fire

Rules that actual flesh and blood cops live by?

They try to avoid getting into gunfights, but if the bullets start flying, they know:

3)   Real cops don’t cut vans in half with machine guns.

In an actual exchange of gunfire, the heart rate goes up, palms start sweating, the mouth goes dry, hearing is distorted, tunnel vision often occurs, fine motor skills decrease, thought processes slow down, and officers can get the shakes because they are operating on adrenaline. The only way to combat and reduce the natural ‘fight and flight’ response is to train, train, train to develop muscle memory.

Thanks to Rick McMahan, a former special agent with Alcohol, Tobacco, Firearms and Explosives, an instructor at the Writers’ Police Academy conferences for several years. His classes have been an invaluable source of information.