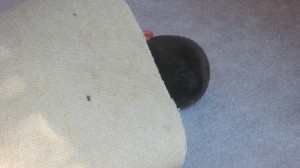 The painting is done in the office! Prepping really wasn’t as stressful as I thought it would be, mainly because I didn’t have to worry about splatters on the old rug. The result is pretty good if I do say so myself. Sheila just gave me a ‘thumbs up,’ so the job passed inspection.

The guys at the paint store really did a nice job of matching colors to the rug. They’ve been in business for a long time and we’re happy to go there rather than to a big box warehouse. It’s easy to give word-of-mouth referrals to such a reliable, helpful operation.

We had a local flooring company do the new rug. They pulled out the furniture, tore up the old rug, laid the new rug, and moved the furniture back in – all in about three hours. Great crew, well-organized, nice guys.

I hung around most of the time, ‘supervising,’ and told them about ‘Kerrian’s Notebook.’ At first, there were surprised looks when I described some of the pages, but after a while they relaxed and had a few laughs. I even got one of the guys to agree to be rolled up in the old rug so that I could take a picture before it was carted off. Honest – the young man is fine and was only inside the rug for five minutes.

Then, the very night that the rug was put in, a TV show aired that had a body in a rug as part of the storyline – “How to Get Away with Murder.” Great cast, fun basic concept so far. I can’t give anything important away, but the rug pops up more than once.

I started thinking about all the times that rugs have been used as a way to hide bodies in the movies and on TV. Kidnappers carry the victims out of their homes, murderers dispose of bodies, terrorists get rid of the targets… it seems to be an easy way to dispose of (or hide or move) the evidence without raising suspicion even in broad daylight. Or at least delay discovery of the crime.

And, the method is perfectly believable, as long as the deed is carried out correctly.

There are physical realities to be dealt with – rugs are heavy and bulky. There’s a reason that carpeting is sliced up into smaller pieces before the crew carries it out to the curb. It’s more manageable then. 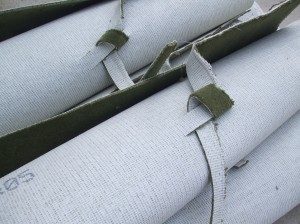 After seeing the guys work with the old carpeting in my house, it makes sense that more than one person should carry the body-in-the-rug on TV or in the movies. One guy or gal at either end of the rug and probably one to support the middle. Bodies flop and bend, so somebody needs to hold up the sagging section if a lightweight area rug is being used. And, keep in mind that most adults weigh anywhere from 120 to 220 pounds. No way is anybody except a body builder going to toss a rug and a body over one shoulder. Too bulky. It’s possible for one person to drag a body-in-a-rug to move it within a house, but if any lifting has to be done, the weight will be a factor and that’s where at least a second person is needed.

Years ago, I watched an average sized woman in a made-for-TV movie, roll up her tall, dead husband in a rug, lift and carry that body all by herself out to a car and put it in the trunk. At no time did she have help. I wanted to throw popcorn at the screen.

The funnier episodes have arms slipping out of a less than well-tied edge, or feet sticking out an end as the partners-in-crime carry the bodies out to the waiting vans – in full view of the neighborhood. What? You think that everybody has a big enough piece of rug to hide a body in, right when they need it?

Would you wonder about the neighbors if you saw a rug being carried to the car? Would you start counting family members?

*I promise, no rugs have been used to hide any actual dead bodies during the writing of this post.

*Many thanks to Blake Lee for ‘posing’ inside the rug. He was a great sport!