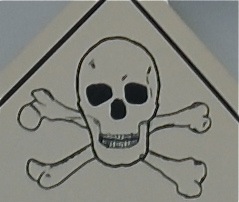 Sheila is a big mystery buff and last weekend had a chance to attend an event in honor of Agatha Christie. Dame Christie’s crime fiction has been more widely read than any literary work in history, except for the Bible and Shakespeare. Pretty good resume.

One of the facts that Sheila came home bubbling about was that lots of Christie’s books featured poison as the weapon of choice. So, she asked me to find out how common those poisons were during the time that Christie was writing in the mid 1900s.

The answer? Agatha Christie used both common and unusual poisons in her books, some readily available in the garden shed, some found under the kitchen sink and others found only in pharmacies. She had been a real-life nurse during WW1 and had lots of chances to learn about, as well as use, many drugs – some of which could have been poisonous if mixed incorrectly or administered in too high a dose. In Christie’s 66 novels, she killed off over thirty unsuspecting characters with poison, some of which are described below. Her choices were based on what she needed to happen in the plot; did the killer have time to get away or did the storyline require a slow, unsuspicious death?

Arsenic – arsenic is a tasteless, odorless powder that dissolves nicely in hot liquids like tea or coffee. The victim doesn’t die right away, so the ‘nice neighbor’ can serve tea with cookies or muffins, then get away with murder when the victim dies hours later at home with a high enough dose. I’ve been told that it’s not a pleasant way to go, involving painful tingling in the hands and feet, kidney failure, abdominal cramping, arrhythmia, etc. Arsenic was used in “4.50 from Paddington.”

Belladonna – belladonna is a nightshade plant, with both the berries and leaves being really toxic. It was used in “The Caribbean Mystery.” Victims might have rapid heartbeat, blurry vision, and hallucinations, but can be saved by using an antidote.

Cyanide – created most famously from the seeds of almonds or cherries, cyanide poisoning is a rapid way to get rid of a victim – dead in just minutes with the right concentrated dose. The person’s breath is reputed to smell like almonds and the skin is tinged with pink after death. Cyanide was the poison of choice in “And Then There Were None,” and several other Christie books.

Morphine – used as a painkiller in normal circumstances, morphine can be deadly if administered incorrectly – and Christie used that fact effectively in a pot of tea in “Sad Cypress.” A great twist in the storyline diverts attention away from the murderer while he ‘does the deed.’

Strychnine – it only takes two to three hours to die from strychnine poisoning and it’s not a nice way to croak. Muscle contractions start and spread, increasing in intensity, until the victim has respiratory failure. Christie chose this method for her first novel, “Affair at Styles.”

While poisons may be a fascinating way to kill somebody on the page, in fact, it’s not used that often in real life. And unlike blunt force trauma as a cause of death, the use of poison is not always obvious at the crime scene. Autopsies have to be performed to discover what happened, with special tox screens needed to pinpoint any poison used.

According to the FBI stats on murder victims in the USA as of 2011, over 8,000 people died because of firearms, and only 5 (five) because of a deadly dose of poison. If you include narcotics in that number, the victims increase to 34.

But, it certainly makes the poisoner that gets caught, unlikely to get a reduced sentence. I doubt that a lawyer could explain away arsenic in the tea.