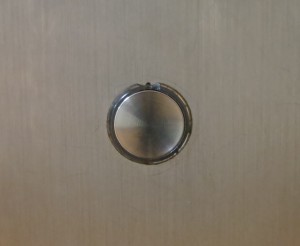 Charlie and I took a road trip to Texas recently and checked into a reputable long-stay chain hotel for a few days. The hotel featured free hot breakfast (with ‘robust’ coffee) and a few dinners, so as Charlie would say, “What’s not to like?” Near the end of the week, we were taking our time planning the day, so I volunteered to go down to the breakfast room for refills on the coffee.

I got on the elevator with a nice young man from another floor; we exchanged smiles as the door closed and the car descended. And stopped abruptly. Our eardrums were suddenly blasted by the hideous sound of shrieking sirens and horns. An elevator is a small space and the sound bounced off the walls and assaulted our bodies for several long minutes. It was actually painful.

We covered our ears, without much success, and shouted to each other, wondering what was going on. The noise finally stopped, to our great relief, but the doors did not open and we realized that we were stuck.

We introduced ourselves – his name was Daniel – and started poking buttons on the control panel. Nothing worked. Open/close, floor buttons, nothing. We tried using the elevator intercom to call for help, but nobody answered right away. Neither of us had a cellphone, and my pockets were empty of everything except my room key card.

Daniel poked the intercom button again, this time shouting into it. The voice at the other end took a while to respond.

“Yes, but the elevator is stuck between floors.”

“Which elevator are you in?” Huh? Couldn’t they tell?

We had a chat with ‘the voice’ about where we had entered the elevator and she figured out that we were in the front elevator.

“The fire department will be here in a few minutes to get you out.”

I happened to know the locations of the firehouses since I had lived in the area for a number of years, and knew that it would be more than a few minutes. But, we were curious…why the screeching siren?

So we called the front desk again – and by the way, we had to yell to be heard – not very reassuring if trying to get and give information.

“What was the screeching siren?”

“There was a fire in someone’s room and when the room alarm went off, the entire elevator system shut down. We don’t know why you were not returned to the first floor.”

Hmmmm. The small fire was out, but somebody needed an elevator repair guy to make a visit after the firemen ‘rescued’ us. While we waited, Daniel and I shared our stories – Daniel was there with his family to support his older brother in a competition being held at the local university. I told him I was a writer. He asked if I was going to write about our experience and I laughed, “Definitely!”

I wondered aloud about pulling a MacGyver – Daniel was too young to know about the TV hero from the late 1980s – but then, neither of us had a Swiss Army knife or duct tape on hand. However, Daniel was tall enough to reach up and move ceiling panels aside as we investigated our options. Could we escape through the access panel as seen so often on TV and in the movies? Could we hot-wire anything?

Not in this elevator. The so-called ‘escape hatch’ could not be accessed unless you carried a hex key socket wrench in your pocket to release the bolts. Even then, maybe I could have fit through the space, but not broad-shouldered Daniel. I wondered what they actually use that panel for, since it clearly is not for people removal. As for hot-wiring? There was nothing accessible to us at all.

We exchanged a few more questions and reassurances from the front desk voice and Daniel’s dad, and at long last, the car finished the trip to the lobby and the firemen greeted us as the doors slid open.

When I asked about getting out of the elevator through the ceiling, the wrenches needed and the size of the escape hatch, one of the guys said, “Well, you don’t have to worry about any of that because the elevator comes back to the first floor and you just walk out the front.” 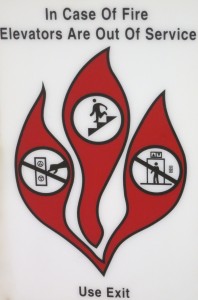 We were never in danger and were only one and a half floors up, so if cables had snapped, we would not have fallen far. Was I scared? Not really and I don’t think Daniel was either. He handled himself well and was good company. We had lots of air to share, since there were only two of us and we were both calm about the situation.

The people at the front desk mentioned that it would never happen again, but I found out later that it had just the night before to another guest. I might have taken the stairs if I had known that.

Charlie said that next time, he’s going to make the coffee run. 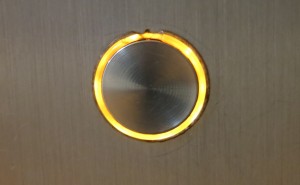 Elevators have long been the setting for action, comedy and even love, in movies and TV. And, why not?

There is a built-in constraint of space and time.

The punch line has to be delivered in the time it takes to get from one floor to another.

People who love (or hate) each other are placed into ‘must act’ situations.

Heists are pulled off successfully when the con men escape through the REALLY large ceiling hatches.

The audience is led to believe that nobody standing outside the elevator can hear the plots being hatched or the secrets being shared.

There is lots of potential for great entertainment.

But, in real life, people sometimes get stuck for hours and occasionally die in elevators. I researched elevator stories and these popped up:

Tragically, a young man saved a friend from an elevator death, but lost his own life in the process:

An elevator mechanic was electrocuted while repairing the elevator and working with exposed wires.

That same month, a woman was horribly dragged to her death when elevator shot up while she tried to enter through the open doors.

My extra long stay on the elevator (as Patti Phillips) really did happen earlier this month, but there are hundreds of thousands of safe elevator rides taken every year.

Thanks to Daniel Gray for sharing the ride in Texas.  🙂