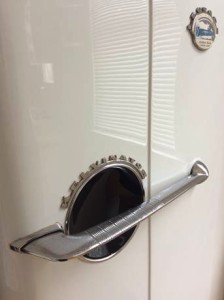 A pal of ours recently acquired a new refrigerator. Not just any refrigerator. A back-to-basics 1950s era fridge that is smaller than today’s ‘big-bigger-monstrous’ sized appliances that need special spaces in the kitchen created for them. Today’s models even come with apps that will tell you what’s on the shelves inside while you are standing in the store. (Now I ask you, doesn’t anybody know what lists are for?) But, I digress. Cynthia St-Pierre, a multi-talented mystery writer from Canada, tells me that the fridge needs to be defrosted once a month. Yup. I told you it was a back-to-basics variety. She sent us a photo of it – nice creamy hue that blends effectively with her color scheme and the retro look that she has been working toward in her home.

On the silly side, I started seeing the fridge everywhere. We watch a lot of British mysteries on TV and suddenly, it was in every kitchen in every show that is set in the late 1940s thru the 1950s. The refrigerators have most likely been in the scenes all along, but now there was a background detail that had jumped into the foreground for us.

It got me thinking. Quite a few TV shows featuring characters that need to store a body until they can get rid of it, have freezers in the cellar. More than one show has featured refrigerators or freezers in the storyline – sometimes in room sized freezers – remember Castle & Beckett turning into popsicles before our eyes? They made it out alive, but not all unfortunate souls do. If the show is directed by a horror buff, then the discovery is all the more startling or even gruesome. We may even have show overspill – imagine opening your refrigerator (especially your freezer) after watching one of these masterpieces? I might be tempted to eat only fresh food for a while.

The concept of hiding bodies in cold household places goes all the way back to the “Green Lantern,” in episode #54, and to “Alfred Hitchcock Presents,” in the episode titled, “Lamb to the Slaughter.” I watched that one during a Hitchcock retrospective. Ewwwww!

It is only fair to note that not all retro freezers or refrigerators come with bodies included. Some current shows set in the 50s feature the retro fridge, but so far, no bodies have been found in them. The “Doctor Blake Mysteries” (from Australia) and the “Father Brown Mysteries” (from England) have plenty of bodies to be tripped over, but none have been found refrigerated. So far.

Just in case you don’t think this happens in real life, think again. In December, 2015, the fully clothed body of a woman was found in a refrigerator in a California garage being cleaned out after tenants had moved. The body was left inside the fridge and wheeled off by handcart to the coroner’s office.

Just last month (June, 2016) a woman found a body in a freezer that she had purchased in a yard sale in North Carolina. She was asked not to open it for a while because of a Sunday School project contained in it. The preliminary thinking about the seller is that the deceased was a relative and that she didn’t know what to do when the person died. 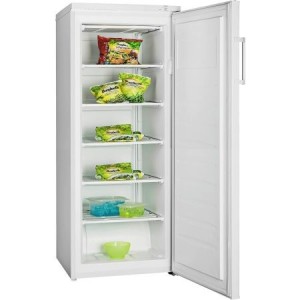 Keeping lots of chops and roasts in your cellar freezer? Hmmmm…
Ever notice that it is the size of a coffin?

Make sure that only a trusted few have access to it. If you happen to observe on a dark and stormy night that all the shelves have been removed and are leaning against the outside, you might need a witness standing next to you when you open the door.

Just to reassure you: no bodies were discovered during the writing of this post. Honestly.