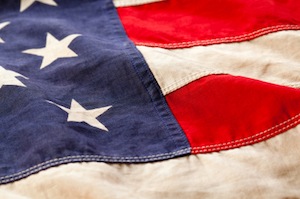 In the USA, 34 states as well as the District of Columbia open the polls for early voting, usually for about ten days before the official Election Day.

I voted earlier today and had some time afterward to look up some facts about elections and the occasional crime and misdeeds surrounding them.

The League of Women Voters helps out at the polls in order to verify eligible voter ID, but in some areas where there are lots of voters and not enough help, errors are occasionally made, but this is not fraud. Every once in a while we hear a case about someone stuffing the ballot box or voting in place of a dead person, but that’s incredibly rare. Between 2002 and 2005 there were only 5 multiple voting cases prosecuted, and the DOJ convicted only 86 cases of ‘improper voting’ – nationwide. That’s way less than 1% of the total votes for that period of time, but election officials do make improvements as infractions occur.

There are serious penalties involved, because at both the federal and state level, there are big fines ($10,000 for each incident) and jail time (up to ten years in Texas).  Great motivation for folks to stay honest when at the voting booth.

Can elections be ‘rigged’ by a candidate because of the way we vote?

Many parts of the country have voting machines that have curtains that close behind the voter as they enter – they are about the size of a department store dressing room and nobody can see what the voter has chosen. 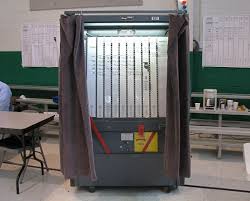 The voter walks into the booth and pulls a three-foot lever to close the curtain. As the voter presses small levers next to the candidate names, votes are noted by the machine. When the curtain is opened by moving the big lever, all the votes are recorded. After the polling place closes, a polling official notes the count (the number of people who have used the machine, not the actual votes) that has been registered on the back of each machine. That final count is verified for each machine by officials from each party. But, machines break down, and the count comes under question as well as the individual votes, not because of fraud, but because of mechanical failure.

Other parts of the country use what can only be described as open-sided cardboard boxes that sit on desks. The voter stands in front of the box, records the votes on a paper ballot, and if he/she is tall enough, can see whatever the neighboring voter has chosen on his/her ballot. Not sure who to vote for? Check your neighbor’s answers. Those boxes are merely a nod to privacy during the voting process.

Paper ballots are still hand counted in many parts of the country, allowing for human error to come into play. Ballots stick together, counting doesn’t start until late into the evening, vision gets blurry when hundreds or even thousands of ballots need to be checked and rechecked at 3am.

In some states, completed ballots are handed directly to polling place officials; in others, a wooden box with a slot in the top is available. Sis voted in a room in Texas that had a big open bucket for the completed ballots because the wooden boxes were full. My North Carolina cousin used a paper ballot that had bar codes at the top. When he was done voting, he slid that paper into an electronic box that grabbed it like an ATM machine and recorded it. He assumes that someone emptied the box periodically, because he said it was only the size of his home printer. Where are those ballots kept during the many days of early voting? They are collected and locked up.

While there have been changes made to the ‘booth’ over the years, the scandal involving the style of ballot itself during a Presidential election, resulted in court cases that went on for months. Remember the ‘chad’ recount in Florida in 2000? Bush was elected, but Gore supporters declared foul.

Throughout most political campaigns during my voting life (more years than I’d like to admit) there has been mud slinging from all sides, some campaigns more vicious than others, some better funded than others, some making up ‘facts’ about the other side.

As we get closer to Election Day, some of the nasty rhetoric has been scaled back, but if you believed everything being said, the ballot would look like this: 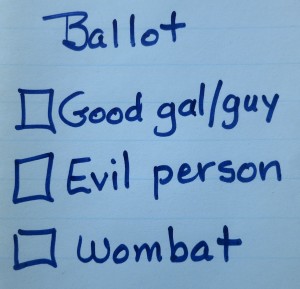 Then there are the authentic candidate scandals that rock our sensibilities. Sexual indiscretions, illegal drugs, corruption – the stuff worthy of an expose – all brought to our attention so that we can ‘throw the bums out’ or ‘keep the bums out.’ In these days of instant media coverage it’s hard to imagine why/how a sitting government official or a potential candidate thinks they can get away with some of the stuff we hear about. The thing is, we have to sort through the junk in the ads and figure out what is true and what is merely a vicious smear campaign. Just because the info is on the internet or in a TV ad, doesn’t make it true. Fact checking with three or more non-affiliated sources might help.

A recent article in the Washington Post (October, 2016) points out some of the problems with current accusations about voter fraud and election rigging:

What does entertainment media have to say?

Hollywood does not always look upon Election Day with favor, perhaps because there are so many colorful candidates, hot button issues, and actual scandals that just beg for a great script. Here are five popular election themed movies:

The Candidate (1972) – candidate has no hope of winning, and he’s in the race so that he can speak up about the issues. But, his ideas resonate with the voters and he wins.

All the President’s Men (1976)- based on investigative journalism concerning the real-life Nixon/Watergate scandal that eventually caused the downfall of the administration. People went to jail as a result of the illegal activities uncovered.

Wag the Dog (1997)- dark comedy involving a Presidential sex scandal about to be exposed the day before election, and a fake war staged to distract the voters.

Swing Vote (2008)-  ‘every vote counts’ taken to its extreme. Some say, conceptually based on the actual Humphrey/Nixon 1968 Presidential campaign, where the voting was so close that one more vote in each precinct nationwide might have changed the result.

Ides of March (2011)- a look at the inner workings of a state level campaign, and how staffers create the media image of a candidate, sometimes with terrible results. Integrity in politics is explored. http://www.sonypictures.com/movies/theidesofmarch/

If reading about elections interests you, any bookstore will have several non-fiction titles written by the campaigners themselves, most notably Presidential contenders and winners. At this time of year? They’re probably on display near the front of the store.

Whatever your party, whatever your ‘hot button’ issue, whomever your favorite candidate – get out there and vote. If you suspect irregularities at your polling place, report the problem to the entity in your state that oversees elections – either the Secretary of State or the State Board of Elections.

If you think that it’s time to ‘throw the bums out,’ then vote. It’s the only way to change the status quo. In my opinion, if you don’t vote, you don’t have a right to complain about the outcome. Thank goodness there are plenty of honest, good-hearted candidates that want to serve. They need your vote to make and/or support good programs for your community.

Then, after you vote, thank a veteran. They helped protect our right to continue to do so in this great, free country in which we live.