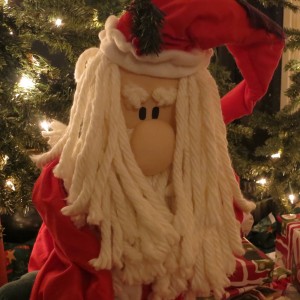 The local Police Chief has issued a BOLO.  (That’s “Be On the Look Out.”)

The Chief wants everyone on active duty tonight to watch for a suspicious guy in a red suit that’s been doing a weird kind of home invasion every year all over town. Here’s the description we have so far:

The suspect has a chubby build – it’s been reported that his belly shakes a lot, but that hasn’t been confirmed.

He is most likely a senior citizen since he has a white beard and hair.

He has a big laugh that was reported as sounding like “Ho, ho, ho.”

There has been no mention of eye color, but they supposedly twinkle.

As for clothes – we had a couple sit with a sketch artist and aside from the face and body type, the guy wears a red suit made of fur, but it’s really dirty – like he rolled in ashes and soot. Six other people corroborated the ID.

By the way, if you see anybody smoking a pipe, call it in. That might be our guy.

In the past, the suspect has been spotted trying to get into houses and leaving boxes behind, but he’s not breaking windows or doors.  We think he must be in decent shape, because he’s been up on rooftops, and has been seen jumping down chimneys.

Be aware that he travels in a small speedy sleigh pulled by 8 tiny reindeer. The reindeer are definite accomplices and work as a team, but if you catch the lead honcho, the rest might follow.

One kid caught him inside his own house last year and tried to bribe him with cookies and milk to get him to stay, but it didn’t work. The old guy took the cookie, gave the kid a nod, rose up the chimney and got away in the sleigh.

So far, he’s not dangerous, but he has repeatedly violated the littering laws. We also have him for illegal entry, as well as disturbing the peace. We get a load of complaints every December about the clatter up on the roofs. Nobody can sleep. Plus, it’s getting embarrassing that we can’t stop him.

Let’s catch this repeat offender once and for all so we can have a good night!

Merry Christmas everyone! May you have a light heart, full of hope and kindness during this special season.

*This has been a nod to the famous poem, “A Visit from St. Nicholas,” generally credited to Clement Clarke Moore.