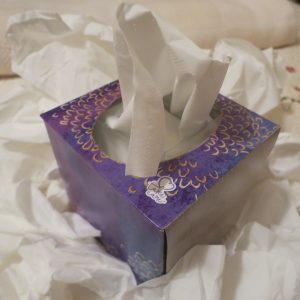 I feel lousy. If I didn’t have to get out of bed to eat, I wouldn’t move. The body aches remind me of what it felt like to be back doing the physical part of basic training at the Police Academy. Everything hurts. Everywhere. Between the coughing, the sneezing, and the sweating, my days are filled with junk. And not the good kind.

I am buried under a pile of tissues.

Sheila has disappeared again. She brings me chicken soup, drops off a new box of tissues and leaves. She’s sleeping in the guest room and has Hammett with her, so it’s pretty quiet in here. I miss them both. Yeah, I know they’re just in the next room, but it’s not the same.

Hammett growled when he heard me honking the first day, so I’m pretty sure he’s away for the duration. I don’t want Sheila to catch this, so she should stay away. Still. A hug and a woof would be good. I admit it. I’m a wimp.

At least I’m well enough to read a little and work on the Notebook. Seriously, it’s been four days since I got dizzy and almost fell off a ladder outside. Who knew that 102 fever would knock out a big guy like me? If I was on active duty, I wouldn’t have the strength to hold a gun steady, and it wouldn’t be safe to put me out on the streets. Can you imagine sneezing in the middle of taking a shot? EVERYONE would run for cover. I might shoot myself in the foot if I ever actually had the strength to pull the trigger. I definitely wouldn’t be fit for roll call until the coughing and sneezing stopped.

It got me to thinking about the Blue Flu – the pretend flu we hear about every once in a while. The kind of flu that gets rumored about when a contract negotiation hits a snag over in NYC or in one of the other larger communities in the country.

It all started in Boston, back in 1919. A full 80 percent of Boston police went off the job, leaving the city unprotected for several days. Unions were on the rise and the cops decided that there was no other way to get the boss’ attention. They wanted better working conditions and more pay. But, Massachusetts Governor Calvin Coolidge disagreed with the concept of unions in general and the right in particular of police officers to strike. He called out the militia, and famously declared, “There is no right to strike against the public safety by anybody, anywhere, anytime.” Coolidge used this get-tough policy to leverage a spot as Vice-President on the ticket to the White House in the following election.

Instead of viewing the police as helpers of the community, for a while at least, Boston cops and unions in general were in disfavor. It became illegal for law enforcement officers anywhere to strike.

It wasn’t until fifty years later that big city police officers were back in the news for a job action. In the early 1970s, the NYC Police Department was under scrutiny for corruption, and at first, the 19th precinct was targeted more than the others by the Knapp Commission. The Police Commissioner at the time, Patrick Murphy, sought to clean house before the investigations went any further and started transferring officers as well as demoting some. But the PBA (the Police Benevolent Association) was upset at the way they thought Knapp was attacking the entire force with what the PBA called “unfounded accusations.” More than 60 of the 90 day-shift officers in that precinct sat down on the job for four hours and would not go out on patrol.  First strike ever in the history of the NYC police department. My boss told me that both good and bad fallout rippled across the country.

Then, just a few months later, while parts of the NYC Police Department were still under investigation, salaries were up for review. Officers faced a tough reception on the streets and any shift could be deadly. While never an easy job, the level of violence toward cops had gone up a notch and cops wanted to be compensated for that danger. 20,000 officers of the NYC police department called in sick for six days in a row. The mayor at the time, John Lindsay, threatened to fire the entire police force if they didn’t get back to work. Public outcry was fierce, with many in support of the theory of pay raises, but taxes were already high and new money would burst the budget. The union leadership got the patrolmen back on the job, but it took years for goodwill between the public and cops and the mayor to be restored.

Cops, firefighters, and hospital workers are sometimes faced with horrendous working conditions in metropolitan settings and while they know what they signed up for, buying the groceries and paying the rent gets in the way of that warm and fuzzy feeling towards management. Full-on Blue Flu sickouts are discouraged when tensions run high, so some unions prefer the work slowdown method. The idea behind it is that the resulting traffic stops and mountains of paperwork will convince the other side to come up with solutions to the issues at hand. It isn’t always about the $$$.

Blue Flu has been a last resort job action. Many would say that it should never be used at all.

If you’d like to read more about the history behind the “Blue Flu,” click on the links below.  🙂

Check out a more recent use of Blue Flu as a job action, in September, 2016: http://www.fox10tv.com/story/33261705/blue-flu-hits-prichard-police-department