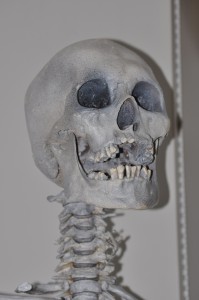 Last week’s article about what Crime Scene Techs really do can be read here.

Warning: parts of this article are extremely descriptive about the work of a CSI at a murder scene.

A Crime Scene Investigator (also known as an Evidence Recovery Technician) is a forensic specialist. A well-trained, experienced CSI tech has an organized plan of action when processing a crime scene. Most go through extensive training, if not in the classroom, then in the field while working with seasoned law enforcement officers, before being allowed to work solo. They study how to recognize evidence, how to document the process and the proper way to prioritize, recover, handle, and package that evidence at the crime scene.

Some of the TV shows and movies touch on the challenges in the job of a CSI, but generally the scriptwriters try not to gross out the viewing audience.

Occasionally, the collection of the evidence requires a strong stomach. If the CSI works a homicide or accidental death scene, they will likely be dealing with strong odors.  Although air/water temperature may affect the rate of decomposition, a dead body begins to stink fairly quickly. Think rotting meat. CSIs have various ways of dealing with the odors. Some apply Vicks under their noses, some use medical masks, but some just get used to it. 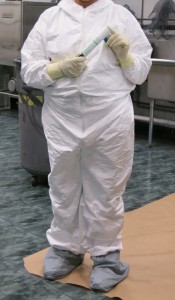 In case you were wondering:  A former CSI told me that the Tyvek suits we see at crime scenes during British TV shows, work very well to keep unwanted fibers and DNA samples away from the scene, but do not block the odors at all.

Sometimes, bodies are dumped in the water, and that affects the rate of decay. The condition of the body recovered from water is a surprise to most law enforcement officers the first time they see it. Unless recovered within the first day or so, the skin and muscle begin to change at such a rate as to become almost unrecognizable for what they are. Special bags are needed to contain the remains while bodies are removed from lakes or ponds. The bags have holes in the sides to allow the water to escape, without losing the body parts. 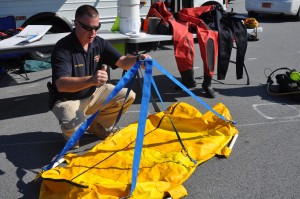 The condition of a body recovered in the heat can be a challenge on several levels. The body swells up and can pop if not handled correctly. In ‘cold cases,’ where the body has been sitting outside for months, perhaps only the skeleton will remain, requiring identification through dental records or bits of clothing still attached to the bones.

Homicide and some accident scenes can be bloody. It’s fair to say that most law enforcement personnel are deeply affected by the surprising amount of blood found at a murder scene or a particularly horrific accident scene. It’s tough to get used to that part of the job, however much experience you’ve had. But, it’s important to stay detached while collecting the evidence, taking the blood spatter photographs, and detailing the information, so that the victims can be represented properly in court. 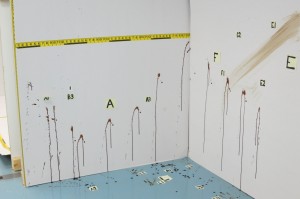 On rare occasion, gloves and protective clothing that a CSI wears can rip or tear, exposing the CSI to possible infection or disease.

Stress and even grief can be factors that might affect the CSIs or ERTs. Working on fraudulent documents or stolen property is worlds away from dealing with dead bodies. Some larger departments offer (and even require) grief/stress counseling after emotionally tough cases, but the smaller departments just don’t have the resources for that. Imagine waking up night after night, reliving a crime scene in nightmares. In cases involving multiple deaths or children, the stress level can be especially high.

So, with all the possible negatives/challenges in the job of a CSI, why would anybody do it?

Because of the result. A job well done helps to put the bad guys away.

The job of a CSI changes based on geographic location and the needs of the department. Some towns have no budget for a full-time CSI and hand off cases requiring special evidence collection to County or State personnel. In general, big cities have more homicides and other crimes, so require full-time CSIs.  In small towns, the Police Chief or Police Officer might do the investigating, collection and analysis of the evidence.

With those factors in mind, training requirements vary from region to region and from decade to decade. Some departments require college degrees (i.e. Criminal Justice or Forensics) for their law enforcement personnel, with the understanding that specialized training (i.e. photography, computers, etc) might be required as cases come up.

Then after getting hired, the CSI tech will spend some time as an apprentice to a more experienced person – think the ‘probies’ on NCIS, the TV show.

One realistic test to see if possible candidates are really suited to the job of CSI at a murder or accident scene is to have them visit a morgue or an ER. If they get through a busy, bloody night at an ER, they might be able to work in Homicide.

If not, I’m told that there is lots of work in Forensic Accounting and CyberCrimes for CSIs, that does not involve blood or body parts.