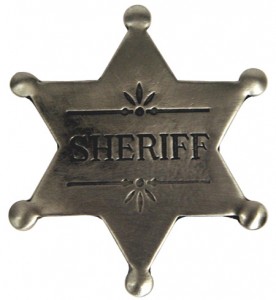 The only interaction most people ever have with a Sheriff is if they’re watching the old “Andy Griffiths Show” on TV or are checking out a Western that features a Sheriff who has come to town to save the day. TV/Movie portrayals aside, what does a Sheriff actually do? And how do his duties differ from those of a Police Chief? Are their jobs interchangeable?

I had a chance to sit in on a training class with a Sheriff, and the differences are important.

In some states, some towns are very small, have little or no crime, and have no real need for a full Police Department. Detectives have nothing to do, so the department might be disbanded for economic reasons. In that case, the Sheriff’s Department would handle whatever crime might occasionally occur.

Candidates have been known to switch from the Sheriff’s Department over to the Police Department, but have to go through the new department’s training program.

State Police have jurisdiction throughout the state.

A Sheriff’s Department has jurisdiction throughout the county.

A Police Department has jurisdiction only within the town lines (unless in active pursuit of a suspect).

If there is a fatal car crash on a state highway, the Highway Patrol handles it, but if there is a felony stop or shooting, then the county (and therefore Sheriff’s Department) handles it.

There are three states that don’t have Sheriff’s Departments: Alaska, which has no county governments; Connecticut, where Sheriffs have been replaced by Marshals; Hawaii, where Deputy Sheriffs work for the Department of Public Safety.

I did a ride-along with a Deputy Sheriff out in a remote county one hot summer evening. While we rode on the highway, he explained what he looked for in suspicious behavior of other drivers on the road, showed me how his on-board computer worked while he drove at 65 mph on the highway, kept in touch with Dispatch about a developing hostage situation in the county, and ended the night with an investigation of a possible burglary. He felt that his cases had the same variety as a Police Officer’s and he liked the wider jurisdiction of the Sheriff’s Department.

Spend a similar evening in a Police Officer’s car and while your tour might not take you as many miles, I would bet you might have the same experience – a proud officer explaining a job he loves.