Several of our pals are firefighters so when we visited the North Carolina cousins, we made sure to stop by the South Atlantic Fire Rescue Expo in Raleigh. We had a blast looking at all the trucks, and I mean ALLLL the trucks, big and small. It’s a terrific family event, with demos all day long, classes for the working firefighters and other rescue personnel, and opportunities for the money guys in the departments to plunk down orders for new, specialized trucks.

When a fire truck rolled down the street, I never used to pay attention to what kind it was. Red was all I remembered as it passed by. Turns out, there are many different types, designed for distinctive situations. Fires are not always the same. There are industrial fires, apartment building fires, private home fires, brush fires miles away from a water supply…and more…so there are a variety of trucks to fit the needs.

On the TV show, “Chicago Fire,” two of the teams at the fire station are assigned to different trucks and have different responsibilities – the men and women on squad and the men and women on engine. They even sit at different tables when relaxing between calls. The squad fire truck has extra material and equipment (big ladders and other tools) for ground support, rescue, and site cleanup. It’s usually more specialized than the fire engine and would be called out for structure fires. The fire engine has hoses and water to fight the fires and is usually the first one sent out to a scene. 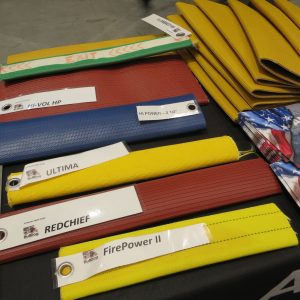 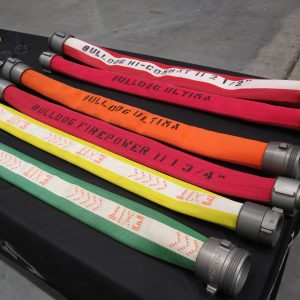 The multiple hoses needed are called ‘lines’ at the fire. If they kink while being used, the water won’t flow, so the engine has ladders and equipment to aid in the positioning of the lines, along with the smaller equipment the fire station considers important for the area/fires being fought. 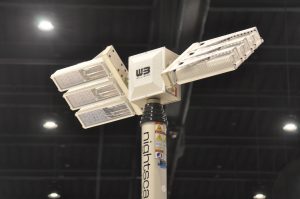 Need more light at the scene for those difficult night fires? The Nightscan can be mounted on the trucks to light up the ground around the work area.

Here are a few of the firefighting vehicles we saw:

The Heavy Duty Rescue trucks are generally 17’ or longer and carry about 4,000 pounds of equipment. That equipment will vary depending on the type of fires or rescue duty the firefighters face in their region. It might be rigged for wet or dry situations, hazmat, search and rescue, incident command, or even be set up for S.W.A.T. teams, and more. They are built to suit the demands of the purchasing city.

The Aerial trucks are the ones the crowds like to see in action. Small towns with no industrial plants or high rise apartment buildings would rarely, if ever, need one, but big cities often do. The price tag on a new, customized Aerial truck can reach a million dollars, and take over two months to construct, but even so, there is a waiting list at some truck companies of more than six months. While we were at the show, a similar big boy to the one in the photo was sold and paid for. The city had waited a while to get it into the town budget, and considered it a necessary tool for fighting industrial fires and below grade rescues, etc. in their miles long, multi-use municipality. The Aerial truck picture above shows a ladder that extends 100 feet when needed. Some extended ladders have baskets/boxes at the top end for the firefighter to stand in, but many do not. 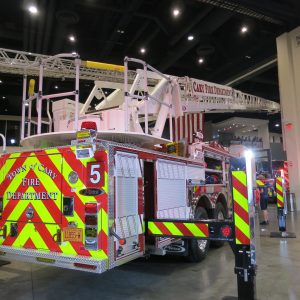 When that ladder is extended, there are stabilizing ‘legs’ (outriggers) that pull out to keep the truck rock solid steady. 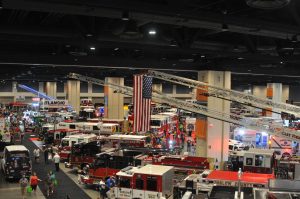 The Aerial trucks in this photo have their ladders extended the full length of their design – one reached 107 feet.

That’s a full-sized truck securely supported by this Rotary Lift. Before these came along, trucks had to be driven to the closest service area when needing to be worked on. It’s not like you can drive one of the trucks into your local car dealership or gas station, so the drive might have been 200 miles each way. Now, the Rotary Lift can be transported to the local fire station. Much easier, and most likely a faster turnaround for repair. 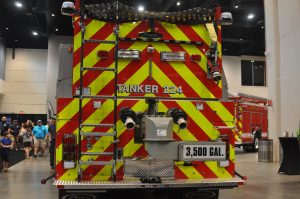 Sometimes, water is not available at the scene. There are trucks specially built for carrying thousands of gallons to areas with no central water supply. 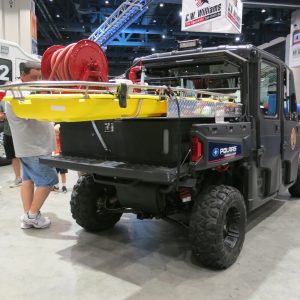 ATVs are used in places that the big trucks can’t go. This one is used at area football games and can carry a Stokes style basket, as well as a hose (and liquid) to put out a small fire. 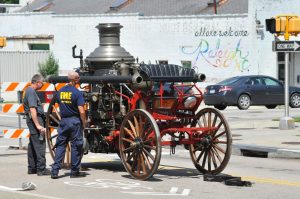 This year’s Fire Prevention Week messages apply all year round. 80%  of U.S. fire deaths happen at home each year, and the actual count had risen from previous years. With that in mind, most Fire Safety campaigns focus on home fire prevention: 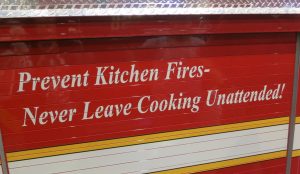 One of the Kerrian’s Notebook readers sent us this photo: 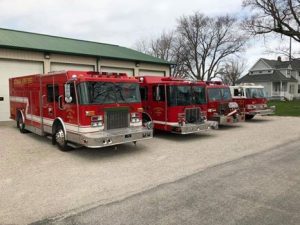 Courtesy of Ken Shoemaker:
“These firefighting vehicles are at the Cooksville Station of the Octavia Fire Protection District in Illinois. Our 1995 tanker pumper front mount pump on a Peterbilt chassis holds 3000 gallons with a front mount pump. It was the first 3000 gallon tanker pumper in central Illinois. We can put 6000 gallons of water on a structure before we drop a porra tank.”