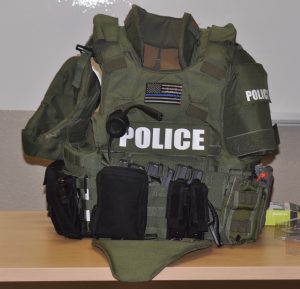 S.W.A.T. stands for Special Weapons and Tactics, implying a special level of training and weaponry for the team members. When we hear that a SWAT team has been deployed, we know that a serious law-enforcement-required incident and threat to public safety has occurred, which may be beyond the scope of the typical police department or first responder.

The Los Angeles Police Department (LAPD) has the reputation of creating the first SWAT teams in the USA, but Philadelphia coined the Special Weapons and Tactics phrase first, in 1964. Philly established a large team whose sole responsibility was to combat the rising number of bank robberies in the city, hoping to stop them in progress. LAPD organized their own program around the same time, but the focus was different, using their teams during civil unrest and riots, when people attacked police and attempted to overwhelm them from all sides.

SWAT team members always have experience in other agencies or departments before applying to and being accepted into this specialized arena.

Depending on the needs of the towns/counties, SWAT teams are larger or smaller, relative to the size and needs of the rest of the police force. The Wichita Falls, Texas, Police Department SWAT Team members are trained in everything from Hostage Rescue to Dignitary Protection during a 60 hour basic SWAT school. Wichita Falls has a little over 200 sworn officers, with a SWAT team of 18. The Wisconsin department we observed was a 40 person department, with a SWAT team of 10, including two snipers.

A SWAT team is called out for:

The team’s mission is to save lives. A hostage rescue is the most complex and the most man power intensive of the possible assignments. The goal is to end it sooner rather than later. If there is no hostage in the house, with just one person in an isolated place, then a negotiator might be used, since the safety of others and time considerations would not generally be a factor.

The National Tactical Officers Association (NTOA) sets the standard for the country for the management and protocols in a hostage situation. The participants are identified and divided into categories:

The civilians are cleared out before a SWAT assault begins. Other jurisdictions may be called in to help. Past experience has shown that in situations like school shootings or bank robberies where a number of people are involved, everyone, including small children, is asked to leave the building with hands up in the air. This way, the law enforcement groups on the scene will know that the children have nothing hidden in their hands and/or are not being used to create more chaos or danger for the waiting crowd(s).

It’s important to note that school patrol personnel might have been employed a few years ago to keep drug dealers off the campus just by their very presence, without any expectation of violent confrontation. Now, more and more often, they are being trained in active shooter scenarios in order to be pro-active in the minutes before a SWAT team can arrive.

The men and women in SWAT have a warrior mindset and are confident in the fact that they will get the job done, that they are the best candidates for the job, and they are not afraid of being under fire. For a set period of time (6-12 months in various departments) after training, Field Training Officers (FTO) guide rookie SWAT officers through the many different scenarios that may occur. Team members are always ready for the callout, so training is intense and constant. If the team stays trained and never gets called upon, that can be tough on morale – “when am I going to be able to show what I can do?” It’s like a fine-tuned machine that never gets used. In big cities, that would never be an issue, but in smaller, less populated areas with fewer SWAT-needed situations, it might become a factor.

Many of today’s police departments have a greater social work component to hostage situations than in the past, so a hostage negotiator gets involved before SWAT starts knocking down doors. Often, negotiators are specifically assigned to the SWAT teams.

There is a certain gender bias that women must fight against in the job, mostly because it is thought by some that a woman may not be strong enough or tough minded enough to carry through in a hostile situation. The capability to shoot is never in question, but sometimes the willingness to shoot is a factor in the negative thinking. The physical tests are not adjusted in most jurisdictions, so women must do the same pushups and gear carries that men do. In truth, women perform valuable functions on the SWAT teams in the roles of negotiators, even if they can’t pass the physicality tests to breach buildings. In general, women have been found to be more observant, better at interviewing than some men, and more emotionally aware at a crime scene, valuable attributes for negotiators.

If negotiations fail, and/or the hostages are at risk of being injured or killed, more aggressive methods are used.

Unless a police department is headquartered in a big city, SWAT teams are often part-time, coming together as a unit when needed, perhaps once a month. However, training continues whether there is a case or not. It’s important for safety and efficiency for the team to train as a group on a regular basis – In Neenah, Wisconsin’s case, they train together for about 16 hours a month.

A team might be shared by other towns in a county, and the home town team members often perform other duties within the department until required for a bank robbery or other kind of hostage scenario. There just isn’t enough money in the budget for a small town to support a team they only need occasionally, but when SWAT is required, it’s essential that they be highly trained. It’s smart to share that capability.

You may have noticed photos of law enforcement officers on the front lines carrying large shields. The men carrying those shields must have excellent upper body strength, since they have to carry the shield in place with one hand and a rifle (or baton) in ready-to-fire position in the other. Try keeping your arms chest high in front of you, bent at the elbows, while holding ten pound weights in each hand. How long can you do it continuously without getting tired or losing focus?

Physical Fitness training needs to be done on their own time, and SWAT members make sure it gets done. Their lives and those of their team may depend on maintaining that strength, agility, and split second timing while carrying the 25-65 pound gear/equipment in all kinds of weather during attack or defensive actions.

Followed by a 2 minute break then (perhaps) 40 overhead lifts of that pack in 2 minutes.

Then, a two minute break followed by holding a plank position for 80 seconds.

Then, a standing broad jump of 6-7 feet, followed by a two minute break.

Then, they repeat the whole routine in reverse.

*Many thanks to the Neenah, Wisconsin SWAT team members who shared their knowledge and experiences during a Writers’ Police Academy session held in Wisconsin.

Next up:  “SWAT Equipment and Strategies”