In “The Swat Team Experience,” I discussed the events that might cause a SWAT team to be called to active duty.

Take a look at some of the equipment/gear they might use during an active crime scene: 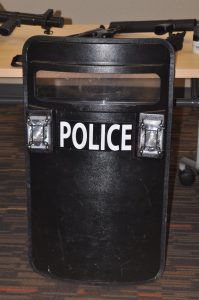 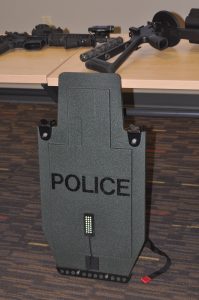 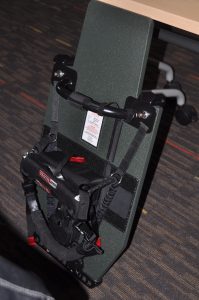 The ballistic shield on the left is larger and heavier, covering more of the body, and has an armored viewing port. The smaller, lighter weight shield (#2) is preferred by some officers because it allows for an easier reach around it with weaponry. It does cover a smaller part of the body’s core. See #3: Both versions have hand holds on the back and attachments for neck support.

The equipment might weigh 50-65 pounds when fully hooked up. Many team members carry

They wear cargo pants because of the fit and all the practical pockets. Some tactical grade cargo pants have extra lining, allowing the officers to carry additional magazines (ammo), and are made of rip stop fabric. They are similar in weight and texture to several camping cargo pants I have from LLBean. They breathe well and allow sweat to wick away, but mine aren’t tough enough to hold ammo.

A sniper has to be prepared to observe and report the event as it unfolds, so they choose a spot within 50-75 yards of the scene that is good for watching, as well as shooting in case that has to happen. In order to communicate their intel, they use an encrypted digital signal that can’t be picked up on scanners, but can be heard by other members of the team. SWAT team snipers generally work in pairs, rotating positions every 15-30 minutes. Snipers want to be on the same plane as the target(s). The more off a 90 degree angle they are, the more off a straight line the shot will go after it hits glass, etc. that might be between the shooter and the target.

One of the tricky, but essential, parts in gathering information is to find is where in the house or building the target is. The agencies involved identify positions around the house for ease of information sharing, using letters or numbers. i.e.: “I’m at Position A, ten yards out.”

A SWAT team is not the bomb squad, although they are able to call upon a bomb expert if needed. In general, no robots are sent in to surveil the area, because the bad guy could pick the robot up and put it in a closet.

The scary part of breaching a building is not knowing what’s on the other side of the door. The teams get very quiet before entrance, but the ride after the mission can be very loud as they burn off the high intensity of the operation. The job does take a toll.

What is used to force out the bad guys?

Flash-bangs (stun grenades) are one tool, called that because of the blinding flash and ear-splitting bang meant to only temporarily blind and deafen, therefore disorienting the target. The goal is not to kill the suspects, just to flush them out into the open. Teams try not to use this in domestic situations because of the potential collateral damage.

Gas grenades: The s-6 multi-launcher gas rounds can cause pain in the face and eyes. FYI, the gas gets into the clothes of everyone in close proximity and lasts for more than 24 hours, even in the wash. 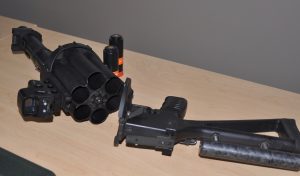 Remington Ball Camera:  This can be tossed into the house, where it will land and take photos in a 360 degree arc. It also records sound. 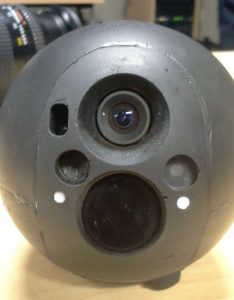 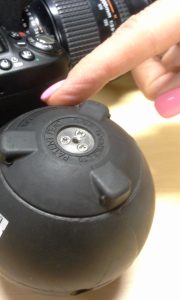 In order to show you the relative size, an Academy participant held it upright while I took the photo.

The sniper rifle is very loud (308 caliber) and if shot inside a house might cause permanent loss of hearing to those in the room, so handguns or other firearms are used, if needed at all.

Armored vehicles:  the teams wait in them while part of the team is working. Not all towns have them at a price tag of from $180K to $630K. Why the hefty cost? At the high end, the armored vehicles can withstand ammo assault from below and to the engine, are bulletproof through continued attack, and have the option of roof mounted gun turrets. The opening scene in Jamie Freveletti’s novel, “Blood Run,” gives a realistic portrayal of a substantially armored vehicle under attack. 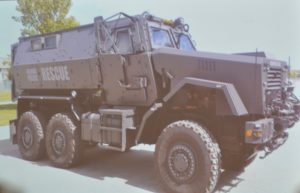 This armored vehicle is used by the Neenah, Wisconsin Police Department.

Curious about salaries for doing this dangerous and challenging job?

Thanks go to the Neenah Police Department members who shared their information and experiences at a Writers’ Police Academy held in Wisconsin.

Many thanks to Lee Lofland for organizing this outstanding annual event.