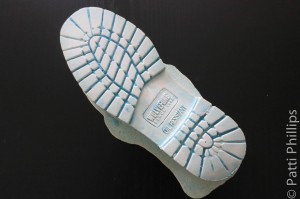 It’s been raining off and on for days. It rained last week during a party, and people were tracking water and a little mud from the driveway runoff onto the porch all afternoon. We had so many different kinds of footprints that it would have made for a great crime scene demonstration.

Because, one of the most overlooked pieces of evidence at a crime scene is created by footwear.

Imagine: If a window breaks as a thief enters the premises during the commission of a burglary, the glass will fall into the house, and onto the floor or rug below the window. When the thief steps through the window, unless the thief has wings, he/she will probably plant a foot right in the middle of the glass. And walk through the house, most likely tracking minute pieces of that glass. That glass may also become embedded in the grooves of the sole of the shoe, creating a distinctive footprint.

If the investigating officer can place a suspect at the scene with the footprint, then there is probable cause to fingerprint that suspect and hopefully establish a link to the crime.

A new method of eliminating suspects right at the scene involves stepping into a tray that contains a pad soaked with harmless clear ink that doesn’t stain, then stepping onto a chemically treated impression card. No messy cleanup, immediate results, and it can even show details of wear and tear on the shoe. This can be a way to establish a known standard (we know where this impression came from) to compare with multiple tread prints at the scene.

Another tool for creating a known standard is the foam impression system. It takes a bit longer, (24 hours) but clear, crisp impressions can be made, including of the pebbles and bits stuck deep into the grooves and the writing on the arch. Very helpful when trying to place suspects at the scene. A rock stuck in the sole is a random characteristic that can’t be duplicated, so becomes another point of identification.

This is how it works: Somebody steps into a box of stiff-ish foam – a bit like stepping into wet sand. 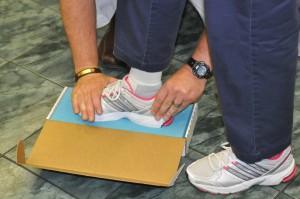 An impression is made instantaneously. The detail is great – down to the wear on the heel. 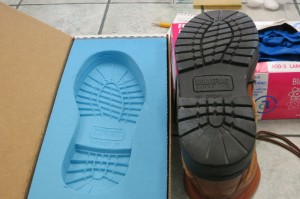 Pre-mixed dental stone (made with distilled water and the powder) is used to fill the impression. 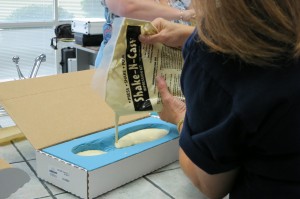 It takes 24 hours for the cast to become firm enough to pop out of the foam. We now have a permanent record of the footwear tread, which could be used for comparison to other prints found at the scene.

Occasionally footprints are found on the ground outside a window or in the gardens surrounding a house after a burglary or homicide. Ever see a crime show on TV where the fictional investigator makes a snap judgment about the height and weight of the owner of the footprint because of the depth of the impression? That’s merely a plot device and is not scientific evidence in real life. A crime scene photographer or investigator can photograph the footprint (next to a measurement scale), make a take away cast, and then compare the impression with those of the suspects or other bystanders at the scene. Beware: making a cast of the print destroys the print, so a photograph must be taken before pouring that first drop of dental stone.

Footprints can be found at bloody crime scenes as well. The suspect walks through the blood, tracks it through the house, cleans it up, but the prints are still there, even though not obvious to the naked eye. Blood just doesn’t go away, no matter how hard you try to get rid of it. It seeps into the cracks and crevices of a floor and even behind baseboards.

A savvy investigator will collect sections of carpet (or flooring) taken from where the suspect might have walked during the commission of the crime, then conduct a presumptive test for blood (LCV – Aqueous Leuco Crystal Violet), find a usable footprint, compare it to a known standard, and then be able to place the suspect at the scene. 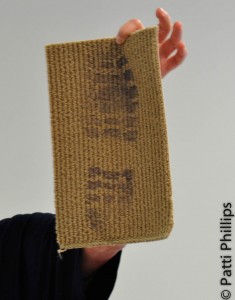 Be careful where you walk. That footprint can be used as evidence.