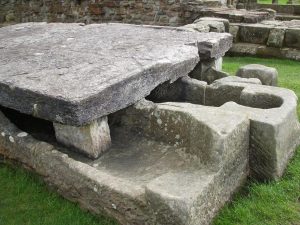 “May he/she rest in peace.” a statement made by attendees at most funerals in one form or another. We all want our loved ones to rest in eternity, free of any earthly concerns. We assume that for those being interred in a graveyard or other burial site, that the body will remain in that spot, marked in some way (by a headstone or plaque) to allow visitation by the heirs in years to come.

To many grieving loved ones, to disturb that resting place would be a desecration, no matter what the cause for doing so. But, however offended we may be at the idea of anyone digging up Grammie or Auntie Millie, States and municipalities have the right of Eminent Domain and that stretches to include moving graves if needed for the public good.

One comment made by some less sensitive, but motivated to complete the projects: “the dead are dead, so they won’t care.”

A common response made by the people affected: “the souls will haunt the diggers until finally able to rest.”

I read recently that sections of a central North Carolina church cemetery stand in the way of the highway department’s wish/need to remove a potential traffic bottleneck. I stood next to the road during ‘rush hour’ one day and there was never bumper to bumper congestion. Four years ago, somebody predicted that traffic would double by 2039, and as a result, this project was conceived. Hmmm. The plan is to widen the road from two to four lanes. Unfortunately, part of the church is about 30 feet from the road and the cemetery is not only smack dab next to the road, but is on both sides of the road. In 1831, when the church was erected on a peaceful country lane, nobody expected a major highway to be constructed a 1/4 mile away, let alone that the country lane would need to be widened to accommodate motor vehicles. 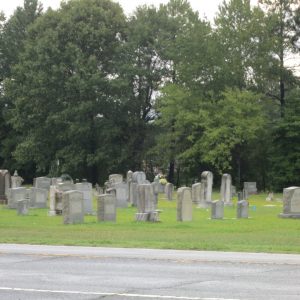 By NC State Law, relatives of the deceased in the ground must be notified of any intent to move the bodies. On occasion this happens because of cemetery re-design (unforeseen flooding, earthquakes, mudslides). In the case of natural disasters, relatives would most likely be okay with digging up coffins and having them moved to safer places. In rare instances, a body can be exhumed by court order when there is a suspicious death under investigation. And, permission isn’t needed from the immediate family in most jurisdictions when criminal mischief is the reason for the exhumation.

In NC, the plan is to relocate 206 of the 2000+ bodies to an area behind the church. Why some, not all? The State doesn’t need all the land. What if the church officials can’t reach everyone? The next of kin has had two years to reply, but what if the last known address doesn’t work anymore? What if all the heirs have died as well? The church will leave a marker near where the body had been (in some cases for 100 years) letting interested parties know where they can now find the grave and headstone. Yes, the headstones are to be moved as well.

I can tell you that people are upset, while some accept the reality. They’ve had almost two years since notification to adjust to the news and react. Stakes are in the ground reminding the congregation and heirs that the State is serious. Lawyers have been involved, negotiations to make adjustments to the plan have been underway, petitions to stop the project altogether have been filed. Blue flags indicate the dividing line between moving and staying put, although if the church followed the line exactly, in one case a family would be split up and the family headstone would be sliced in half. So, sane heads prevail and decisions are made to do the least harm. 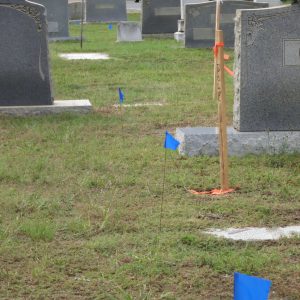 Who takes care of the cost of moving the headstone and any damage that may occur? In this case, a contractor is being paid to move the headstones, but only pays for damage or repair if it’s specifically in the contract for hire. The NC church has become a go-between of sorts and has a few guidelines in place to ensure the quality and appropriateness of the stones.

Where does the law stand on this?

It varies from State to State, but in general, all living heirs of the dead must be found and notified of the plans to move the graves at the State’s expense (within the State’s definition). If one of them objects, the move cannot happen legally. But trust me, noncompliance can be expensive.

True story: decades ago, a proposed major highway spur was due to be completed in New Jersey. It had been on the books for so long that the locals assumed it would never be finished. When the time actually arrived, the homeowners were given a choice to move or stay and be cut off from city services because of the road design. The State finished the project and the locals that stayed lost any possibility of compensation, etc. and did indeed lose access to services, including for a short time having to drive two miles out of the way to exit the housing area. In other words, sometimes permission must be given, but that doesn’t mean the State will make it easy not to comply. If permission isn’t needed for road construction, the contractors will come in and bulldoze anything in the way. Legally.

Is this the first time a graveyard or personal or supposedly protected public property has been impacted by the needs of the many? Not by a longshot.

Golf courses have been built on top of graves, although sometimes accidentally. Read “Cemetery at the Golf Course,” here: http://bit.ly/1tUQ4rX

Eminent Domain covers the destruction and/or reduction of the federal park system.

Eminent Domain comes into play when ancient burial grounds stand in the way of energy development.

Is it legal to be buried on your own property?

What would keep me from bringing Auntie Millie home to my 5 acre piece of property?

Whether in the name of greed or progress, the Eminent Domain stories just write themselves. And plenty have been, both in books and in the movies.

*Notes: There is nothing fictional about this post.
Photos taken by me, Patti Phillips.