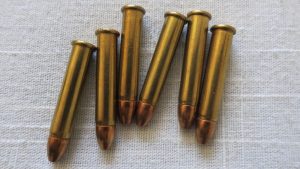 Not long ago, a writer mentioned in a Facebook thread that cold must have an adverse effect on firing accuracy. Well, yes and no. Assuming that the shooter is a crack shot, it depends on the firearm, the type of bullet, the type of shooting involved, and how extreme the weather is.

Both extreme heat and extreme cold can affect the trajectory of a bullet. ‘Extreme’ in this post refers to temperatures above 90 degrees Fahrenheit and below zero.

Cold air might cause a more noticeable variation in the bullet path than warm air. Cold air can slow down bullets because cold air is more dense, so it’s harder for the bullet to move through it when longer distances are involved. Hunters might choose a different shaped bullet to help with this issue, but the bullet shape and air density really only comes into play for most shooters when the deer is over 300 yards away – the distance of three football fields. But, even at 200 yards, tests have shown that any bullet drop caused by the cold is only going to be a tenth of an inch.

Cold can cause misfires as a result of using the wrong cleaning oil for the weapons – one that’s not meant for cold temperatures. Oil that gets gummy with temperature variation doesn’t help any shooter, whether using rifles or handguns. Read “Did you clean your gun this week?”

‘External ballistics’ refers to what happens after the bullet leaves the firearm.

It can get really windy in the dead of winter, what with huge storm fronts moving in. I wouldn’t want to step a foot away from my toasty house when the wind chill makes me miserable just to be outside, but law enforcement officers in our far Northern States sometimes don’t have a choice. SWAT teams have to take into consideration the effect that the wind, added to the cold, will have on any distance shots they need to take. Wind is unpredictable and rarely constant, and can affect the shot anywhere along the path of the bullet. However, most hostage situations or other interactions with the bad guys, take place at under a 100 yards, which greatly reduces the firing challenges law enforcement might face, to practically non-existent.

Over 300-400 yards (mainly applying to snipers in the field, or hunters in the mountains) a windy day does make a fairly large difference when adjusting for the shot. Experts and charts tell us that at temperatures around zero, a bullet can shift wide by as much as four inches off target and drop as much as 2 inches, than if the same shot was made at 90 degrees Fahrenheit at that range. Plus, the greater the distance, the more the variation.

Here’s an interesting comparison of shots made by those long distance shooters in different air temperatures, without wind or other factors to interfere.

The target is 1000 yards away – about ten football fields:

But wait. The gunpowder in the bullet can be affected by the cold as well. Some gunpowder is temperature sensitive, so if you load your own bullets and live in an area with extreme temperatures, you need to buy the temperature insensitive type. The wrong gunpowder in the bullet can slow its velocity. Added to the dense cold air issue, it’s a recipe for missing the long distance target. To be honest, today’s ammo manufacturers are more in tune with customers wanting fewer misses related to this issue, and several temperature insensitive options are readily available.

These days, there doesn’t have to be much guesswork involved in adjusting for wind and temperature variations. There are apps for that. If a phone has enough bars out in the woods, the average hunter can get online and check out a ballistic calculator with charts to help with corrections for the conditions being experienced.

Law enforcement officers in the steamy South face different obstacles when dealing with heat. Higher temperatures result in gunpowder burning faster, which then causes higher bullet speed. A competitive shooter from North Carolina shared that in the summer he shoots in the early morning, when temperatures never get all that high. But, he’s more concerned about his grip slipping because of the sweat on his palms than from any effect of the temperatures on his ammo. His experience taught him to purchase handguns with non-slip surfaces and grips. In any case, his targets are all under 100 yards away, so the only thing affecting his shots are a bad day at the range and his own sweat.

A gun store owner told me recently that hunters out in extreme temperatures are usually accompanied by big game guides who make sure the equipment is properly selected for the conditions.

Long distance shooters need to take these temperature variations into account. People using their handguns at under 100 yards? Not so much.