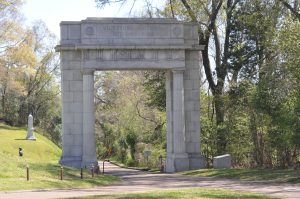 In January of 1861, spurred by deep political and societal differences, Mississippi became the second State to secede from the Union. Soon after, Mississippi combined with others to form the Confederate States of America. In April of that year, the Confederate forces fired on Fort Sumter, and the Civil War was truly underway.

Strategically located at a bend in the Mississippi River, Vicksburg was recognized by both President Abraham Lincoln (Union) and President Jefferson Davis (Confederate) as a key to ending the War Between the States. In 1862, Vicksburg was vital to the supply of deliveries for the South, providing food, etc. to the neighboring States. Lincoln knew that Federal control of the Mississippi would provide a lifeline to the Northern supply lines as well, while cutting off half of the Southern States, for both the military and civilians.

Confederate General Pemberton was in charge of the military presence in the Vicksburg area and was ordered to hold the river and surrounding countryside at all costs. Union General Grant was tasked with taking control of the southern section of the Mississippi (Cairo, IL, and southward). Pemberton, motivated by duty and allegiance to the Confederate cause, was fully aware of the Vicksburg geographical advantages and was determined to mount a great defense. With swamps and bayous on one front, 170+ cannon overlooking the river approaches, and 50,000 Confederate troops scattered throughout the region, he was sure that he would prevail.

But, Grant was relentless. By October, 1862, his armies had secured the Mississippi south of Cairo, IL, and up from the Gulf, with only Port Hudson, LA, and Vicksburg, MS still under Confederate control. Vicksburg was the stronger of the two, so Grant focused his efforts on it.

Naval warfare took on a new look during the Civil War. In December, 1862, the U.S.S. Cairo (one of the Union’s first ironclad ships) was assigned to unblock the rivers of obstructions near Vicksburg and disable the batteries as well. But the Confederate forces weren’t just blocking the rivers with debris. They placed mines in strategic locations. The Cairo came to a quick end, sunk by two mines that ripped holes in the hull. (Remarkably preserved under sand and mud, it was recovered in 1956 and sits in an open-air museum in Vicksburg National Park.)

Unable to defeat the formidable Vicksburg defense system, Grant resorted to a siege of the town. Cut off from any incoming supplies and constantly bombarded by Grant’s artillery, the civilians moved underground to caves beneath the houses, living there for weeks. Food was rationed, but ran out, the water was unsafe to drink, and living conditions were intolerable. After 47 days, Pemberton knew that the military and civilians under his protection would not survive the siege and he surrendered to Grant.

The damage in the Vicksburg region went beyond the physical destruction to the buildings and farms. After Pemberton’s surrender, the Union soldiers stayed around for another ten years, enforcing order amid the chaos of Reconstruction.