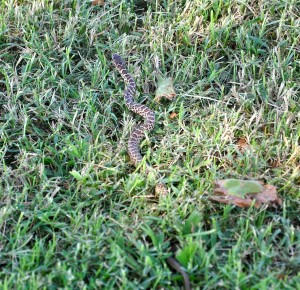 In “Is that a body under the deck?” I mentioned the snake issue. We’ve had snakes on the property for a long time, a fact that I am not happy about. Yup, I know that they serve a purpose in the grand scheme of planet health and balance, eating unwanted mice and assorted other small pesky critters that seem to want to take over the world. There are snakes at the golf courses that keep the rodent population down and away from the fairways. Okay, that’s all good.

BUT, now the snakes are out to get me. They seem determined to take over my backyard. I was in the middle of bleaching the back fence and a rattler appeared at my feet. Sheila was weeding the side garden and a brown snake (not a garden snake) fell off a railroad tie in front of her. Lots of screaming and jumping up and down and running happening – me louder than Sheila, I have to admit. 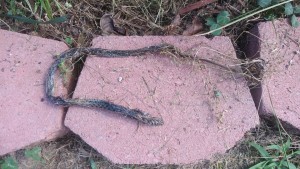 After we discovered a few two-foot long snake skins in the Spring near the deck, we called a snake handler. Yes, there are people that ‘handle’ snakes for a living. Let’s all say a collective “Ewwwwww!!!” for that career choice.

The snake handler told us that he would be happy to come out (for $300) to take a look, but could not guarantee results. The problems: 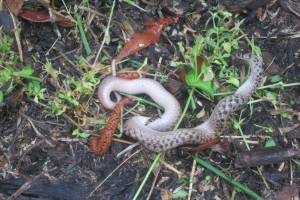 Solutions available to us:

We’ve taken care of the food source under the deck, and the rattlers have moved outward, but apparently there are enough geckos and skinks underneath the ramp that keep the brown snake happy. He has expressed no interest in us and other than to startle Sheila in the Spring, he has not made any aggressive moves. But, he is now three feet long and an inch and a half through the middle. We think he’s poisonous, but can’t get a definite ID. The rattlers and the brown snake never seem to overlap their territories, so I’m willing to let him alone for a bit longer while I take care of the known threat.

Anybody have a hawk for hire? Email me.

““““““““
Fast forward a couple of years.
We needed to replace the ramp and when the old boards were torn up in August, a skink and a few tiny baby black snakes scurried away from the sudden light cast upon their scaly selves. I was happy to see the black snake babies, because the mom/dad (who mysteriously appeared a couple years ago) have been busy keeping the rattlers away. Yay for the slithery team! 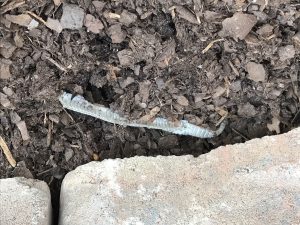 We’re not screaming yet, so I think we’re safe for now.  😉