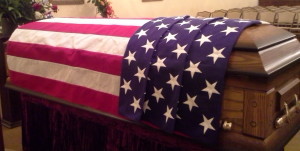 We’ve spent way too much time in funeral homes and cemeteries lately. I know it’s a part of the cycle of life, but it seems like every time I pick up the phone these days, I hear another one of those awful messages that starts with: “I’m so sorry…”

This time we put a favorite older cousin into the ground. He was the inspiration for three articles that appeared here on Kerrian’s Notebook last year about the use of firearms – their care and the training needed to maintain safety and competency levels. Any time I wrote an article about firearms, he checked the details for accuracy, then would send me a ‘thumbs-up’ email. He didn’t have a large collection by enthusiast standards – only a half dozen rifles and handguns – but he knew a great deal about the history of each and enjoyed them all at one time or another during his weekly visits to his gun club.

He had been a paratrooper, a sailor, an aerospace engineer, a furniture maker, and most important of all, a churchgoer and a family man.

He died of cancer, but was not a young man – an octogenarian when he succumbed. He chose to fight and live his life fully, right up until the docs admittedly gave him an overdose of meds. And even after that, he went out to lunch and dinner all the time, held court at the local breakfast place every morning and was at the shooting range two weeks before he died. He was chalky pale, but as long as he was able to walk, he was learning how to reload bullets, checking new sources for unusual wood, attending the latest antique car show, chatting with friends he made along the road of life.

Now you might wonder: “80? He probably died of old age.” Nope. In our family, 80 is the age when you admit you’re on Social Security and start talking about retirement. He had been driving for a trucking company up until his birthday in December. They wanted him to stay on, but he said that it was time to slow down a bit. Most of my side of the family lives into our 90s, so I was in denial about my Cuz being that sick.

We still wonder if administering the extra meds was a calculated risk or a really bad choice made by the doc. We know that his intention was not to harm, but to help. But, it was the wrong choice. Not like the slip of a knife during a surgery, or the wrong kind of anesthesia that would cause someone to die on the table, but lethal in the end.

How often does this happen? Medical malpractice and honest mistakes are different in the eyes of the law and insurance companies. At this point in the post, I might normally give you statistics and information that you could use in an article of your own, and Cuz would love that he got to appear in Kerrian’s Notebook once again, even if behind the scenes.

But, today? I’d simply like to salute a guy who lived a life that many would envy, happy until the end. We will miss him.