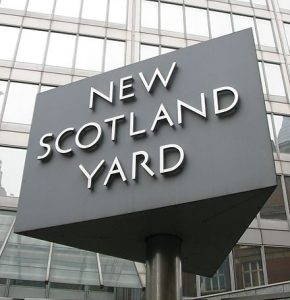 Formed in 1829 by Robert Peel, Scotland Yard is known the world over as a British police department, but it is not located in Scotland. The entrance to the first headquarters happened to be on a street called Scotland Yard, and eventually, the street and the building became known as one and the same. The New Scotland Yard is no longer in that spot, but the name has remained.

Scotland Yard is officially called the Metropolitan Police Service and is the largest police force in England. It has law enforcement jurisdiction in London, but not the City of London, the subway system, the above ground trains, or anywhere outside London.

England has no national police force. Rather, each area force is overseen by police/crime commissioners (PCC). PCCs are in charge of their own chief constable and police force, but also must be sensitive to the needs of the community that elected them. In the case of the Metropolitan Police Service, the Commissioner serves at the pleasure of the Queen, but is recommended to her by the British Home Secretary.

The Metropolitan Police duties include:

We (the international audience) hear more about Scotland Yard because it is the Criminal Investigation Department of the Metropolitan Police. The CID houses:

It shares its investigative findings and resources with other police forces and even though it doesn’t have primary responsibility elsewhere in the UK, it sometimes gets called in on homicide and other criminal cases. It is the British liaison with Interpol (the international police organization) and all UK terrorism cases are coordinated through the Yard. One of the tools Scotland Yard relies on is a national computer system called Home Office Large Major Enquiry System – catch that? (HOLMES, as a nod to the fictional English detective).  🙂

If you are interested in becoming a detective for this renowned organization, the process is easier now than in the past. About three years ago, a shortage of Met detectives compelled the powers that be to widen their recruiting strategy. In May 2017, it was publicized that interested candidates no longer had to work as a beat officer first; they could apply directly to become a detective constable.

You can apply from age 18 through 57 to be a new Police Constable. If you happen to want the job and you are already 57, be aware that retirement is compulsory at 60, meaning that you will have one year after the two year training period to serve as an active duty detective.

You must be mentally and physically fit, which includes passing the Beep (or Bleep) test. This test is mostly about running back and forth between stanchions at increasingly greater speeds in shorter periods of time during 21 levels. It’s a real cardio workout and looks much easier than it really is.

During the assessment process you will need to demonstrate characteristics required for the role of police constable. In addition to the physical and mental tests you must show:

Training takes place at Police Scotland Training and Recruitment Centers, the Scottish Police College, and at your home Division. There are periodic testing days spread throughout the two years, in both physical and academic areas.

The two year course is divided into six units relating to:

For more information about the requirements of the jobs and training aspects, please visit: