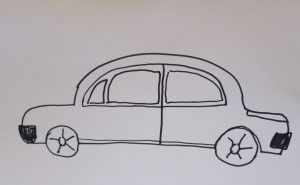 Sheila here, taking over Kerrian’s Notebook today to tell you what’s happening with my car. I know that Charlie has mentioned my knee surgery. Recovery is progressing, but one of the consequences of having the left knee worked on is that I can no longer drive a manual shift vehicle. Depressing the clutch requires too much force for me to drive safely and without pain.

It was officially time to get a new car. I’d been putting it off for a while, hoping that rehab would get the leg strong enough to allow me to keep my old, comfortable automobile. No such luck, so I shopped for an automatic and did my due diligence about the features that each brand offered. I took test drives at more than one dealership to check out the interior features and ease of handling. After careful consideration about all the mechanical stuff, I found one in the perfect color, and after negotiating a bit, took out a lease on it.

The first two weeks, those smiling all the time honeymoon weeks, gush about the car to everyone weeks, were wonderful. Charlie applauded my choice and was happy to see me out and about, driving to meetings and the garden center on my own. I’m forever grateful to a few people for helping out when Charlie couldn’t take me to the doctor or to rehab sessions.

Sad to say, honeymoons don’t last forever. On Day 15, the car wouldn’t start. The fob didn’t work. The engine would not turn over. The dashboard went black and each subsequent attempt resulted in a loud rapid clicking sound – a common indication that the battery is dead. After two weeks. A brand new, 2020 car.

I contacted the dealership and after talking me through an attempt to start the car with the original fob as well as the backup fob, the service rep suggested a tow truck. Luckily for me, the lease package included 24-hour roadside assistance, an important perk since we live an hour away from the dealer.

The car was jumpstarted with difficulty, then put on a flatbed to be taken back to the place I had leased the car. Mechanics in the service department ran diagnostics while I had a loaner – same brand, different model, and earlier year. I liked the radio in the loaner, but not much else.

After two days, the mechanics could not find anything wrong with my own car, but gave me a new battery in “good faith.” The car was delivered to my house on Wednesday morning, and the ‘new car envoy’ gave me the standard two-week post-purchase rundown, answering all the questions about how to manage the settings. What to safely turn off, what to leave on.

Basically, the car is run by a computer and the key fob allows you to interface with the computer.

The service department theory? While I worked in the gardens, and had the fob in my pocket on the key ring, every time I passed the car sitting in the garage, the fob (10-15 feet away from the driver’s side door) would tell the car to get ready, ‘cause “here she comes.” Well, no. I was gardening. Walking tools and seeds back and forth behind the car with the garage door open. But, the car was ready and stayed ready, and that ran down the battery.

Say, what? Okay, strange, but I now had to leave the fob inside anytime I was going to be near the car and not going to drive it. Inside the house, I had to store the two fobs in different rooms so as not to confuse them and cause them to both shut down. Plus, neither of the fobs could be hung inside the house within ten feet of the car in the garage.

The next day, Thursday, about 24 hours after the return of the car, I drove to the grocery, and then parked at the vitamin store. Because of the Covid19 concerns, we have curbside pickup on purchases we make at small shops. The owner delivered the bag to me and we chatted for a bit with the engine still off, and the car window open. Another customer drove up, so I waved goodbye and started the car. Ooops. Tried to start the car. It wouldn’t.

I eventually started it on my own by stepping in and out of the car, opening and closing the door, then pressing the ignition button. It should not have worked like rebooting a computer, but it did. I drove the car back to the dealership and left it there for a week, taking another loaner. They still could not find anything wrong with mine except for a dead radio amplifier, which they replaced. I’ve had it back for two weeks now, but really don’t trust the car.

Do I have a lemon? State law requires four visits to the dealership about the same issue during a two-year period. The dealership opened an official file with the manufacturer during the second visit, demonstrating recognition of a potential problem, should it occur again.

Each state has some form of new car Lemon Law that protects consumers from faulty new cars. There are six states that also have a Used Car Lemon Law – Hawaii, Massachusetts, Minnesota, New Jersey, New York, and Rhode Island.

The North Carolina Lemon Law
Also known as the New Motor Vehicles Warranties Act (N.C.G.S. 20-351), it applies to new passenger cars bought in North Carolina. It requires manufacturers to repair defects that affect the use, value, or safety of a new motor vehicle within the first 24 months or 24,000 miles (whichever comes first).

NC cars may be covered by the Lemon Law if all of the following have happened:

Read your warranty. Your State may have different qualifiers.

Under the law, the refund is reduced by a “reasonable allowance” for your use of the vehicle and there is a formula that is followed to figure out the refund.

Disputes
Many auto manufacturers have dispute resolution programs for customers with warranty problems. Some require you to use these programs before you go to court. Read your warranty for more information.

I chose a reputable car company, with great customer satisfaction ratings from thousands of owners, and a reliable dealership. Fingers crossed that I’ll get more than two weeks out of it this time.