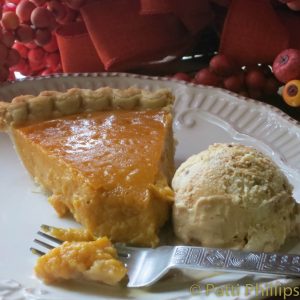 Survival was our goal.

“Get through the month of November in one piece” became our mantra.

It started out with great promise. Halloween was enjoyed by all. During two months of ownership, the replacement car for the two-year-old lemon had behaved for nearly two thousand miles. Started every time, no tow trucks involved. With that hopeful weight lifted from our brains, we felt confident that the holiday season was off to a great start. Wahoo!

The deck had been finished, so what major thing could go wrong? HA! Here are some lowlights:

The new deck started to smell. It was sooo different from a new wood smell. This was hideous; bad enough to keep us from sitting out there. Turns out, it wasn’t actually the deck that caused our eyes to weep. It was the swarms of flies that visited the fly traps placed at either end of the deck. They came by the hundreds, not dive-bombing us as they had initially before we resorted to buying the traps, but lured by the traps to such a degree that the traps were filling up. Flies  were circling, waiting for their turn to enter. Think dead body smell. We moved the traps farther away from the deck, and the smell then wafted toward us only when the breeze blew. A drop in temperature helped. By the way, those fly trap bags hold thousands of dead flies. Ick.

Staining the deck turned into an on-again-off-again deal. We were hoping to begin that part of the project two months after construction was complete. Rain prevented that from happening – repeatedly. We set up, prepped time after time, only to see sprinkles or mist or downpours drench the wood. That wood needs a full 24 hours of drying time after it gets wet, before application of the stain, plus the overnight temps can’t dip below freezing. HA! It’s taking weeks to get it done, and this is just the first coat. 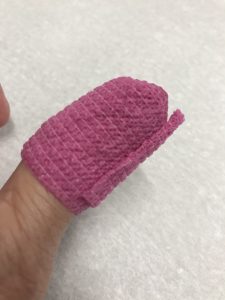 Sheila was attacked by a vicious standing mixer while she attempted to change the beaters after baking a cake. A bizarre interaction with a formerly friendly mixer resulted in a bleeding, broken thumb, and a trip to Urgent Care. She still hasn’t uncovered the offending appliance. It lurks, ready to pounce again, I’m sure of it. But, her thumb is much better now and she can wiggle it. 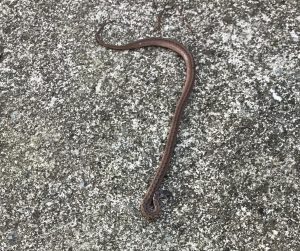 The snake was trying to sleep, but the gal helping with the yard work raked away the pine straw protecting him and he perked up. Good thing he was sleepy because he was identified as an adult pygmy rattler, a venomous snake that lives in NC. I was a bit shaky while taking the photo, so it doesn’t show the shape of the head or the pinkish gray coloring that specifically puts him in that category. It took a lot of work with a hoe to send him to snake heaven.

The water heater stopped doing its job. It was 16 years old when it kicked the bucket, so the situation was not unexpected, merely badly timed.

The deck, the flies, the thumb, the snake, and the water heater could be dealt with while shaking our heads and writing checks, and rolling our eyes. Trifles compared to what else happened.

A dear friend passed away suddenly and time stopped, frozen after decades of friendship. A medical mistake was made, and our friend left us way too soon. We were in shock at the service and at the reception later, trading stories of her remarkable life. It’s been a couple of weeks and Sheila tells me she still starts to text her to set up a movie/lunch date or a trip to the museum. When that happens, we chat about the fun we all had together.

How can we be thankful?

Hug your friends and family. Be thankful for the best parts of your life. They make the rough parts bearable.