If there are no paragraph separations in the article, double-click on the title. This will reveal a more readable version. Kidnapping: “Moving another person a distance by force or fear without the person’s consent.” I was a kid the first time I heard the term ‘kidnapping.’ A multi-million dollar ransom demand for the safe return of the adult son of a wealthy man had been splashed all over the news. I was horrified that anyone would be mean enough to kidnap anyone, then ask for money not to harm them.   In fact, kidnappings have been committed for centuries. Conquering armies enslaved the conquered to serve in the armies, or to work as domestics for the people back home. In the day of King Richard the Lionhearted, royalty on the losing side in war would be taken from the battlefield and ransomed for enormous sums. Hence the term: king’s ransom. Unscrupulous ship captains conscripted men off the streets to serve on long ocean voyages for no pay.   In the 20th and 21st centuries, ‘kidnappings’ have become frequent enough that they now fall into four categories under the term aggravated kidnapping. 1) kidnapping that causes the victim serious bodily harm or death; 2) kidnapping that involves a demand for a ransom; 3) kidnapping taking place concurrent with a carjacking; and 4) kidnapping based on fraud, force, or fear of a victim who is under age fourteen.   Kidnapping by parents is in another category altogether, since generally, the parents are in the middle of custody fights and no harm is meant toward the child. Make no mistake about it: both kidnapping and aggravated kidnapping are serious crimes with huge punishment if a conviction is reached. If guns are used, or somebody gets beaten up during the commission of an aggravated kidnapping, the sentence served can be over ten years.   Revolutionary groups and/or terrorists have employed kidnapping as a way to raise money for their causes. But, all countries look unfavorably on this practice and if caught and convicted, the criminals face time in jail or death by execution. One of the most famous kidnappings in the 20th century was that of Charles Lindbergh’s infant son, in March, 1932. Ransom notes were delivered, with increasingly higher demands for money. Law enforcement tracked multiple leads, but tragically, the child’s body was found on the side of the road in May, 1932. It became a federal case as pursuit of the kidnapper(s) intensified. It took two years to find the man responsible, another two years to convict and carry out the sentence – death by electrocution. The Lindbergh case resulted in laws that introduced the death penalty for taking a kidnap victim across state lines. 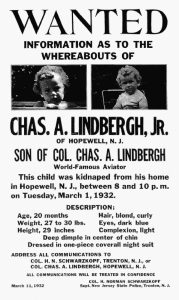 This FBI article relates details of the case: https://www.fbi.gov/history/famous-cases/lindbergh-kidnapping According to FBI stats, there were over 29,000 active missing person records involving children under the age of 18 at the end of 2021. How do we guard against our children getting snatched? There are a few basic steps to take (suggested by a private investigation firm with offices in Florida, New Jersey, and New York City) that can help keep your child safe: Cyber Safety Children now share their lives online, and the downside of all that socialization is that they might be lured by dangerous people to meet in the real world. As long as they live under your roof, you should check to see what they are up to online. Both computer and phone activities should be age appropriate and time-limited. You’re the parent. You’re in charge. The Check-First Rule All children should be taught to check with parents first before going anywhere. Period. Stay aware Stay off the phone when you are out and about with your children, so that you can be alert to any strangers taking unusual interest in them. In case you get separated in a crowd, children should know their address, parents’ names, and phone numbers by heart. Ways to React When an Abduction is Attempted If someone is attempting to forcibly take them somewhere, children need to know how to react if you’re not there. Teach your kids to scream “Call 9-1-1!” or “Call a cop!” One suggestion: They could start spinning their arms around like a windmill, making it harder to grab them. Another suggestion: Give your child a whistle to blow, to scare off anyone trying to avoid attention. Teach Kids To Spot the Trusted Adults If someone is bothering your child, and you’re not there, they should look for a security guard, an employee with a name tag, a police officer, or a mom with her own children in tow. Talk to Your Children You can help prevent an outsider from taking advantage of your child’s vulnerabilities by letting them know that you’re always ready to listen. Talk to them every day about their day. Be an active part of their lives. Get to know your neighbors. Be alert to unknown people that keep driving through the neighborhood. In this era of GPS maps, it’s really hard to get lost, and children should never give directions to strangers. *Photo of the Lindbergh flyer from the FBI files.
If you would like to share this article with your friends or post a comment - please click here to visit full story page. →