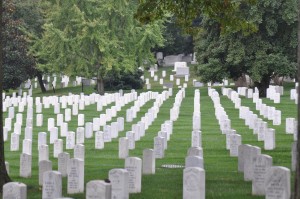 Arlington National Cemetery, the most famous of the USA’s military cemeteries, turned 150 years old on June 15, 2014. Special ceremonies were held from May through June to commemorate the anniversary. “Honor the Tradition, Remember the Sacrifice, Explore the History,” written in the cemetery brochure, was/is a thoughtful reminder for all who walk through the hallowed grounds.

We had a chance to visit on a misty day in October, picked up a map from a helpful guide in the Welcome Center, and spent several hours in the peaceful 624 acre landscaped rolling hills. As we passed the thousands of headstones – over 400,000 active duty military service people and their families – we were struck with the size of the place. The stats on the website didn’t prepare me for the reality of the graves that stretched to the hilltops and beyond, or the hush that settled over everyone. There were no loud voices, no running children or barking dogs, even with the hundreds of fellow visitors all around us.

The Tomb of the Unknown Soldier was on our list to see. 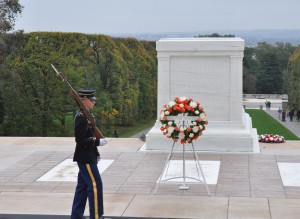 This memorial contains the remains of unknown servicemen from WW1, WW2, and the Korean War. 24 hours a day, 365 days a year, the soldiers from the 3rd Infantry Regiment keep vigil. The changing of the honor guard is scheduled for every hour. 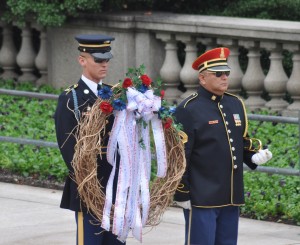 We hadn’t realized it, but members of the public can participate in wreath-laying ceremonies at the Tomb. We had the privilege of witnessing two groups. The website provides information about how to arrange to do this – anywhere from five weeks to six months ahead of time.

The quiet was broken by the sound of guns in the distance. Our brochure told us that Arlington National Cemetery conducts between 27 and 30 funeral services Monday through Friday as well as several on Saturday. Our path took us closer to an apparent salute in progress.

All the visitors were safely behind ropes and fences while the guns were going off. And they were loud! My camera jumped (a LOT) the first couple of times I tried to get the photo of the guns in action. There was a long time between each boom and we found out that about 45 minutes before the service of higher-ranking officers, the cannons/guns/rifles will begin firing. This signals attendees that they should gather at the graveside while the casket is traveling through the cemetery. 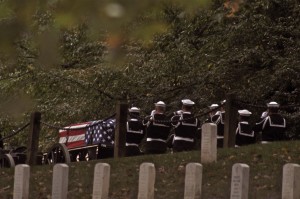 Then once the service has been completed, the appropriate number of shots will be fired again, in quick succession.

Commissioned and warrant officers buried at Arlington receive standard military honors, and can also have an escort platoon and a military band. When we saw the horse drawn caisson carrying the flag-covered casket on the road above us, accompanied by a good-sized band, we figured the deceased had to have been pretty important. We kept track of the initial rounds and knew there had been fifteen.

Here are the rules for numbers of shots fired:

We were told later that the deceased had been a Vice-Admiral. 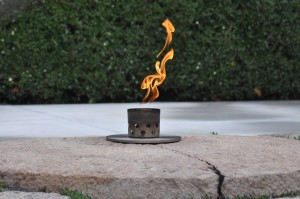 One of our stops during the visit was at the graves for President John F. Kennedy and his family. It seemed to be a popular memorial, with a eclectic mix of visitors. International tourists were curious and took selfie snapshots; Americans paid their respects to a President assassinated while in Office; a teenager got a history lesson while standing next to a senior citizen; a group of the Vice-Admiral mourners stopped and chatted quietly before moving on. Many had tears in their eyes and one older gal openly sobbed. It’s hard not to be affected once you round the corner and see the eternal flame.

There are dozens of monuments erected to honor the dead throughout the cemetery. There are only two Presidents interred at ANC. This is a list of ten representative memorials, with more information about each (from the ANC website).

Arlington National Cemetery is operated and managed by the Department of the Army. ANC Explorer is a mobile app that can be used by visitors to locate gravesites and/or conduct self-guided tours. If you travel to our nation’s capital, Arlington National Cemetery should be on your must-see list, and the app will help explain some of our history not always covered in school.

Thank/help/employ a Veteran. Their sacrifices have helped to keep you free.