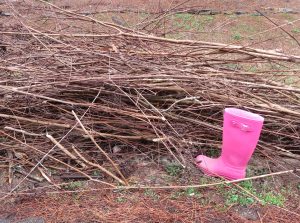 Sheila here. This morning, I finished trimming one of the backyard crepe myrtles and hauled the branches out to the curb. I had to use a reciprocating saw to cut through part of the tree, but was able to use a handheld clipper for some of the smaller sections. I felt that clipper fall out of my pocket while I stacked the debris at the curb. It wasn’t going anywhere, so I finished dragging and piling the branches before I looked for the wayward tool.

Guess what? It took me a few minutes to find it, even though I basically knew where it had fallen and had a limited area in which to search.

We frequently watch TV shows and movies telling the tales of people that go missing in the night, people who might have wandered off from a campsite, people or children who might have been separated from a touring group, but who then get lost. Nothing nefarious suspected, but the person hasn’t turned up in a reasonable amount of time. Maybe they tripped and fell, hit their head, and became unconscious.

There are search and rescue groups organized for just this purpose, and most of the members are well-trained volunteers. See Fiona Quinn’s article here.

We, the public, think a body in the woods would be easy to find, unless buried in the ground, or hidden behind a rock, so why do we need all the people and the dogs walking close to each other in a well-defined, mapped out grid?

How hard could it be?

Charlie’s crime oriented brain has rubbed off on me, so this is what I did. I stuffed an old pair of jeans, stuck one of my bright pink wellies at the end of a leg, piled the branches on top of ‘the body part’ and took photos. My apologies to the new neighbors who don’t know what Charlie and I do in our spare time.

Can’t possibly miss that bright pink wellie I showed you at the beginning?

This is what you’re searching for: 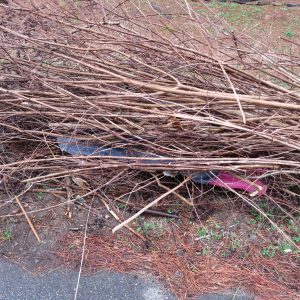 The ‘leg’ is fully visible from this angle, right? 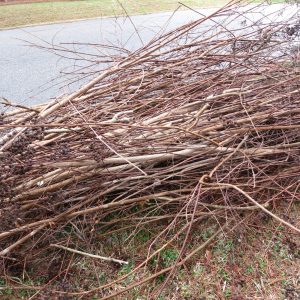 All I did was walk to the other side of the brush pile. A glimpse of the jeans can be seen, but not the bright pink wellie. 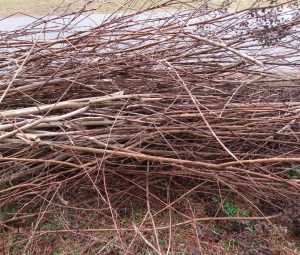 I did not remove ‘the body part’ before taking this picture, I promise you. I knew right where the jeans and wellie were and could not see them. Standing right over the ‘crime scene,’ and just because I was at a different angle, and a few steps in a different direction, the area looked quite innocent. Just another gardening pile, in the middle of a nice neighborhood, waiting for pickup from the city refuse truck.

This is why we need Search and Rescue teams walking close together, looking at every blade of grass in front of their feet. In this case, if the ‘body’ had been in the woods, the dogs would probably be called out as well.

Many thanks to all the hardworking volunteers who train vigorously in tough terrain to get certified and are ready to help whenever called upon.

Disclaimer: I did not use a real body part. The jeans were stuffed with t-shirts. Seriously.  😉 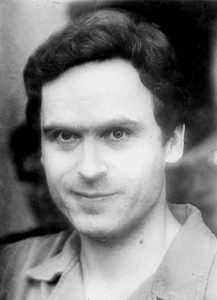 Warning: Some content may be too intense for some readers.

In 2005, the FBI conducted a symposium in Texas for law enforcement officers and defined serial murders in this way: “The unlawful killing of two or more victims by the same offender(s), in separate events.”

As terrifying and brutal as these events are, the FBI reports that serial murders occur in less than one percent of all murders committed in any given year.

That doesn’t mean that law enforcement treats serial murders any less seriously, just that most cops will never encounter that kind of case. When they do, the hardest part of the investigation might be recognizing that two or three murders committed across several counties could be linked in some way. Different personnel spread through different jurisdictions might not see all the facts in evidence and never see the connections, hence the reason that some serial killers are never caught.

Although not every point is true for all serial killers, there seems to be a common thread in the backgrounds of most, starting in their childhoods. Here are a few of the behaviors that appear to tie the Serial Killer category together.

As possible suspects are investigated, and/or eliminated, more weight is given to those on the list who have those behaviors somewhere in their history.

Serial killers like Ted Bundy, Jeffrey Dahmer, and John Gacey all had above average intelligence, as evidenced by their ability to commit multiple crimes and evade capture (and even detection) for so many years. But Dr. Katherine Ramsland, Forensic Psychologist, maintains that even the smart ones can do dumb things.

“…serial killers range from Ivy League caliber to downright moronic. Self-defeating habits or failure to plan wisely have brought many down. It’s not all about IQ. Even smart ones can be idiots at just the wrong time.”

As Dr. Ramsland said, “You’d think if you had a corpse with you, you’d at least try to be inconspicuous.”

Dr. Ramsland said, “The behaviors that stand out for budding psychopaths who are the most apt to become violent involve unmotivated deception, tendency to blame others, callous disregard, and ADHD – a combination of them all. Such children will tend to manipulation, deflect responsibility, damage property, steal, do poorly in activities that require sustained discipline and focus, and play cruel pranks. They will also exercise their need for control on others who are weaker, including animals, and this could involve experiments, mutilation and killing.”

Some serial killers are angry for imagined (or real) slights and seek revenge against those who were “mean” to them.

For more information about the criminal mind, visit www.katherineramsland.com Dr. Ramsland is the author of dozens of books and articles on the subject. Her latest, “Confessions of a Serial Killer,” is the untold story of Dennis Bader, the BTK killer. Scary stuff.

The average person is unlikely to interact with a serial killer, but many law enforcement officers or profilers get specific training in order to keep it that way – to keep the community safe from predators. It has been found that not all serial killers work alone, and a good percentage (around 15%) are women.

How do you keep from becoming a victim?

Use common sense, be extra aware when alone, and stay safe!

More than ever, it seems as if readers and professional writers that follow the Notebook most enjoy learning about the nuts and bolts of crime as well as the crime fighters that take care of the bad guys. It was fun to see that two of our (always taste-tested) recipes made the list this year as well.

Here are the Top Ten Fan Favorites for 2017, listed in reverse order. Click on the links to re-read the articles (or enjoy them for the first time) and let us know in the comments whether your faves made the list.  Happy sleuthing, one and all.  🙂

Take a look at “Kerrian’s Notebook, Volume 2: Fun, facts, and a few dead bodies,” just released. Download to your e-reader and enjoy!  🙂