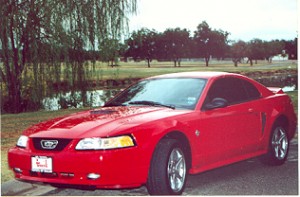 The dealer tried to talk her out of buying it by saying, “It doesn’t like rain or snow.”

She looked at him dead-on and said, “When does it rain or snow in north Texas?” She signed on the dotted line ten minutes later.

She loves that car. I love the sound of the engine. Everybody who rides in that car wants to see how fast it can go. (Trust me, it’s quick.) It really does not like rain or snow, because the last time she drove cross-country to visit, it got stuck in the driveway just before she was scheduled to leave…in the rain. Read the story here: http://bit.ly/LIUzQF A neighbor helped us then.

This visit, she drove Sally a lot more and had fun showing it off to some local car buffs. But, when it was time to load the bags in her dream auto and leave, the engine didn’t want to turn over. There was a heavy, rhythmic whirring sound, but it didn’t quite ‘catch.’ That seemed better than the finality of the ‘clicks’ last time, but not by much. It wasn’t raining, so the cause was a mystery – not one that I could solve.

9:35am   We called our roadside service agency.  We were assigned a reference number. The usually reliable agency was slammed with holiday calls, so we settled in for an hour-ish wait with more coffee all around.

11:15am   A man from the tow truck company called and said he was on the way and wanted to know how to get to us. His announced location was 20 minutes away and I gave him ‘can’t-get-lost’ directions.

Noon-ish  The tow truck guy showed up, but he had a wrecker, not the flatbed truck Sis needed. To our surprise, he had hooked the Mustang up before we got outside to give him the key. Even the tow truck guy saw the mistake in doing this, but muttered something about ‘the’ (translation= only) flatbed truck being needed elsewhere first. He unhooked the car as we discussed transmissions and Mustang shapes and bumpy roadways and damage to the car. Lots of grumbling on his part.

12:15pm   He called someone and requested a flatbed truck be sent to our address.

I asked, “How long will that take?”

We waved goodbye and sat down to lunch.

1:10pm   No sign of any tow trucks. I called the roadside people. The gal who answered was very sorry about the delay and said that a dispatcher would call me right back with an update about the tow truck arrival. Nobody called back.

2:05pm   No sign of any tow trucks yet.  I called the roadside peeps. B was tapping her foot, any chance of getting a couple of hours on the road before dark, long gone. The roadside gal was dismayed when I told her the story and said that a dispatcher would call me right back. I yelled, “WAIT!!!” into the phone and told her that I had been hearing that all day, that I had officially lost my patience and that I would wait on the phone until someone spoke to me who knew what was going on.

Turns out that the towing company had taken me off their list of jobs for the day, because for some reason they did not understand about the flatbed truck.

After several apologies, the roadside people issued me a new reference number and said someone would be right out.  Sure thing. Bridget canceled her hotel reservation and went off to take a nap.

3:15pm   No tow trucks in sight. Mustang has not moved. Guess whom I called? A supervisor got on the phone, and I ran down the details. Again. She apologized for everyone’s poor performance and asked if there was anything else she could do for me. She didn’t think it was funny when I suggested that she come get the car.

4:10pm   A frantic phone call came in from a driver of a flatbed tow truck. He said, “I just got a text from a guy who was supposed to come tow your car. He says there was a screwup with the paperwork this morning and he brought the wrong truck. But, his flatbed broke down and he can’t make it, so I’m doing it. I’m 45 minutes away, but I’ll be there.” I knew his location and thought it would take much longer, but hey, he called. I was suspicious about the ‘text,’ but hey, he called.

In the meantime, the repair shop was going to close before we could get there. They had been expecting the car all day and knew what was and was not happening, but we made arrangements to leave the Mustang in a safe location overnight.

5:05pm  The tow truck arrived. Wahoo! We made it down to the repair shop and the guy waved the $20. flatbed fee. Good thing.

5:45pm   Roadside gal called and wanted to know if everything had been handled to our satisfaction. I answered, “Well, it was a bit longer than a 45 minute wait…”

I think I showed great restraint. No bodies anywhere. Yet.