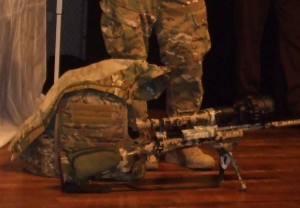 Sniper:  an expert marksman that operates from a concealed position some distance from the target, usually having the additional advantage of elevation.

Snipers have been used as an effective strategy in fighting wars for over 200 years. They came into use in law enforcement as a way to combat domestic terrorism without involving the military. There is more to it than being a great shot, and there are several differences between police and military sniper jobs as well as different types of training involved.

A law enforcement sniper in a SWAT (Special Weapons and Tactics) unit generally operates as part of a team in hostage situations or other hi-risk events, sometimes to provide protection, sometimes to eliminate the threat of a specific target. The targets are generally under 100 yards away and the assignments are usually completed in a few hours. Police snipers shoot only as a last resort. 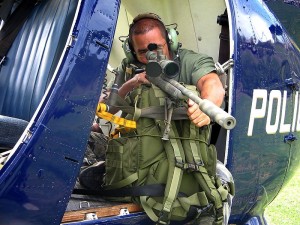 A military sniper works with a spotter or a team to protect and defend his military unit from harm while they are on assignment during wartime. He is typically shooting from a higher, concealed place, so that he can spot the enemy and alert the troops below of enemy movement. On occasion, a military sniper is shooting at a target 1000 or more yards away. The record for a long distance confirmed kill shot is currently held by British Army CoH Craig Harrison, achieved in November, 2009, at a range of 2,707 yards.

SWAT team members have sometimes entered law enforcement after serving in the military, so if you’ve ever wondered what it takes, here are some of the requirements from both military and civilian routes.

Each of the branches of the military has similar basic training programs, but vary slightly because of the specific needs of each.

Potential Marine Snipers (like Special Agent Gibbs on NCIS) can expect a rigorous thirteen-week training schedule after Marine Boot Camp and then additional training, depending on the specialty.

While in Boot Camp the candidates must attain at minimum:

There is Infantry Training after Boot Camp where the candidate may volunteer for scout/sniper school at either Recon School or at the Infantry Battalion. The candidate must have scored well on the Armed Services Vocational Aptitude Battery (ASVAB), have no Courts Martial on record, be of sound mind, and have achieved the rank of at least Lance Corporal.

Just in case you’re wondering what is required past the basic Physical Fitness Test (which is mostly about cardio fitness and endurance while wearing workout clothes), all Marines must now complete a Combat Fitness Test while wearing the complete uniform (boots, etc)

It is suggested that a candidate for an Army Sniper spot must be great at math and science, in order to know how to adjust the angle of a shot for wind speed, direction and target range.

They should have learned the basics of marksmanship and have entered shooting competitions before enlisting in the Army.

Graduating from Advanced Infantry Training (AIT) means that you have passed the minimums. You are given two minutes for each:   pushups and sit-ups. The two-mile run is timed. The chart below shows minimum requirements.

After graduating from Boot Camp, the candidate will wait for a sniper opening and then try out.

It is possible to become a spotter for a sniper as an alternate plan. Spotters go along to protect and defend the sniper from enemy attack and keep track of the enemy while helping the sniper adjust his shots.

During training, the candidate learns about digital photography, computer imaging and satellite communication.

After the technical part is mastered, he also learns about camouflage, patrolling, and how to get in and out of hostile territory without leaving any trace behind – not even bullet casings.

Advanced marksmanship is only one part of this training. No out of shape hunters need apply. Navy SEALS have one of the most demanding physical training regimens anywhere.

They must be able to work independently and in team situations, since they often arrive at the scene before any local task force and have eyes on the targets before anybody else does.

Minimum requirements for the FBI: 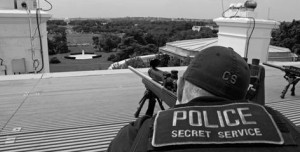 Then, if accepted, candidates attend the FBI Academy in a 21 week training program, then serve in a field office for at least two years.

After the two years, they can volunteer for SWAT or HRT training and then must attend Marine Sniper Course for 12.5 weeks.

Every field office has its own SWAT team.

Still want to be a sniper? Before you open the door to the recruiter’s office, think.

For more information about sniper training, click on the links below:

*Photos of Police and Secret Service snipers courtesy of Wikipedia.