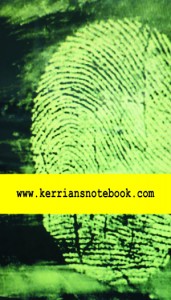 Kerrian’s Notebook has been around for a couple of years and because it’s mostly about law enforcement and crime, Sheila and I got invited to a mystery writers’ convention. We had no idea what to expect, but we were promised a good time.

Lots of professionals go to conferences every year. Even cops. Why do we go?

1) to catch up on the latest investigative gadgets available.

2) to debate the pros and cons of emerging trends that need addressing.

In between the sessions, we rub elbows with colleagues we haven’t seen for a while, meet new people who have done interesting things in their departments, and share our most outrageous cases with a few pals at the bar.

We knew the mystery writers wouldn’t be dull and boring, but what could they possibly talk about for four whole days?

Murder, that’s what. The who, what, where, why, and how of murder(s) on the printed page.

A few of the writers found out that I was a cop and bought us drinks and dinners – ok lots of drinks – while we chatted about crime, the problems with the CSI Effect, and the smartest criminals we had ever met. Best of all were the brainstorming sessions. They proposed scenarios for future books and I either shot them down because of the realities of available manpower and equipment or told them about similar cases where their ideas copied actual situations.

Just for fun, think of the possibilities at the conference itself. Soooo many chances to do someone in. Consider…

Your roommate snores like a buzz saw on steroids, so you are driven to:

Suffocate/strangle her in the hotel room and then distract the cops from you and your sleep deprived motive by stealing her cell phone, laptop, and wallet. You have been in the bar talking with colleagues at the general time of death in order to establish your alibi. You get sloshed enough to establish that you didn’t notice the non-breathing when you returned to the room. You ‘discover’ that she is dead in the morning when she doesn’t get up for breakfast. The hotel switches rooms for you while the investigation continues and you can finally get some sleep.

If for some reason, you can’t dispose of the electronics right away, at least turn them off and check out the hallway swap table for a temporary stashing spot. Doesn’t that black table skirt just beg to be used as a hiding place? 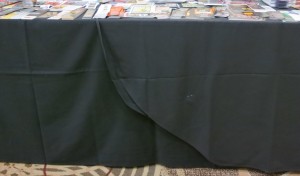 Your agent schedules a meeting to tell you that the royalty checks are delayed again, the publisher may not renew, but you can’t write for anyone else for a year AND everyone else except you will still get a piece of your hard earned pie. Since you have a binding contract with the agent for another five years, you go bonkers and:

Inject a poison into her neck in the elevator or put poison in her drinks at lunch. Neither scenario requires disposal of the body because you just walk away from the scene. Premeditation might come into play if you’re caught, since you probably have to bring the poison with you to the conference. Disposal of the syringe or eyedropper requires stealth, and a public garbage can. 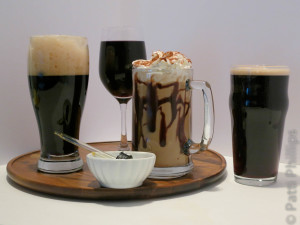 Note the colors of the liquids and the types. All are opaque. The glass reflects the images nearby, making it even harder to see what’s really inside. If the intended target sticks to water or white wine, you’ll need to use a different method.

The Keystone family reunion is being held in the same hotel as the mystery conference. Uncle Harry has cut his children out of the will. The kids see that the banquet for the writers is next door to the family banquet room. They enlist the help of a hungry writer for a hefty fee. The writer sets up the how and where, the kids do the deed and the writer finally has a paycheck in his pocket without having to share a dime.