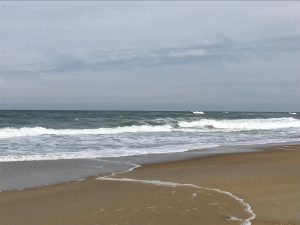 A recent vacation week took us to the beach and we were lucky enough to rent a cottage right on the ocean. What a pleasure to wake up to seagulls calling to each other as they found breakfast on the incoming surf at the edge of the broad expanse of sand. Morning coffee was extra special as we breathed in the sea air and planned the day ahead.

Aside from all the great sunsets, fabulous seafood restaurants, and much-needed relaxation, we found time to chat about fictional bodies and where to find them.

TV shows and movies feature their share of corpses that have washed up on the rocks lining the shores of lakes, bays, or oceans. Any crime scene at water’s edge has its own challenges for the CSI techs processing the area for evidence, and our vacation spot highlighted a few.

Consider footprints on the sand: 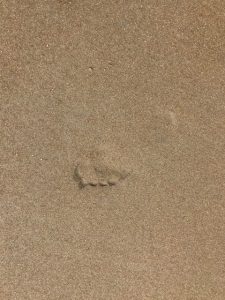 This print had been fully visible until a wave washed it partially into oblivion. 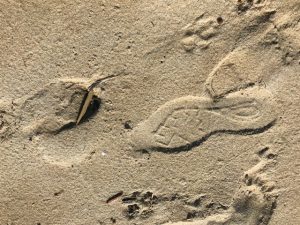 Sneaker treads next to the barefoot print, showed the traffic on the dry part of the beach just a few feet closer to the dune. 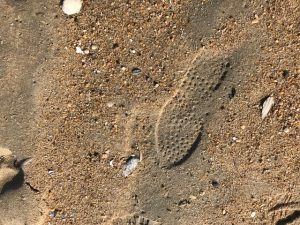 There was more than one kind of sneaker tread to be seen.

The sneaker and shoe companies have data bases going back several years indicating the treads and styles of the various shoes they have manufactured. A search warrant or a friendly conversation with the people at the companies will reveal specialty editions of their footwear and the year they were produced. Matching the footwear to the prints on the beach can narrow the suspect list – helpful if the culprit remained in the area and the sneaker was an unusual brand. 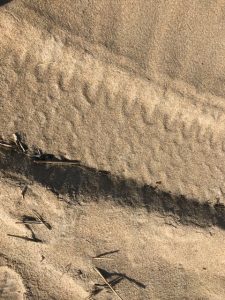 A windy afternoon caused this tire tread to lose its definition. 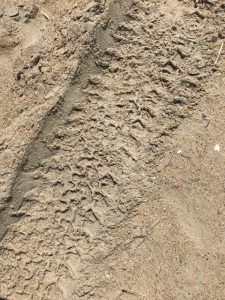 This new tire tread was just ten feet away from the footprints. 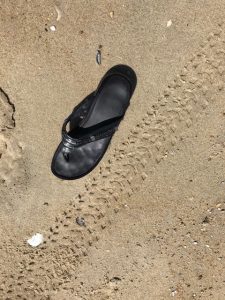 Beach bikes were in use as well. I didn’t have a ruler with me, so Sheila donated her sandal. This gives you some perspective of the width of the tread, essential in determining the type of vehicles near the ‘scene of the crime.’

Tire companies have data bases as well, and make their information available to law enforcement officers when needed. CSI techs take photos of the various treads for later ID and if needed, make casts of the footwear prints. Read “Is that your footprint?” here.

All three vehicle treads were within 20 feet of each other, along with all the footwear prints seen here – and it wasn’t high season yet, when a greater variety of cars, dune buggies, bikes, and shoes would be around.

Any crime scene in such a well-traveled place means it will be tough to find the killer. Nature washes or blows away the evidence and the crime scene is compromised by all the foot and vehicle traffic.

Law enforcement officers have to hope for witnesses to the dastardly deed.

We turned our attention to the places to hide the body: 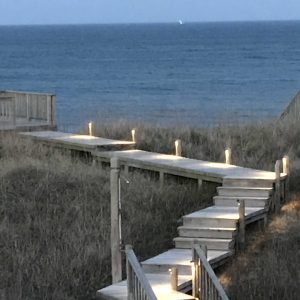 This lovely walkway leading from the cottage to the dunes gave access to an area that looked suitable for body stashing. Except that it wasn’t really all that great for anything covert. Three houses near ours had direct line of sight to that walkway, and all had overhead lights strung along their own paths to the beach.

Each of the other houses had three floors – ours was the smallest of the group.  That meant that anyone looking out at the ocean could also see anyone dragging a body out to the beach grass next to/under the boards. 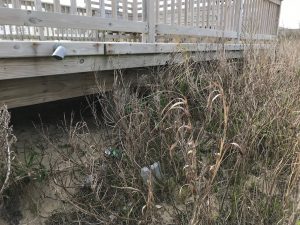 But, let’s say that nobody is looking out the window. While it is illegal to dig up the beach grass in the dunes because of erosion programs in most oceanside communities, a killer would have no such concerns. BUT, that Beach Grass (actual name is American Beach Grass) is tough. It’s meant to be, so that it holds the sand in place during stormy weather. It would not be practical or at all speedy to dig a hole in a grass-covered dune in order to hide the body.

Maybe that’s why so many bodies in the TV movies are dumped elsewhere and merely wash up on the beach. Then the writers don’t have to worry about how to hide the body at the scene of the crime.