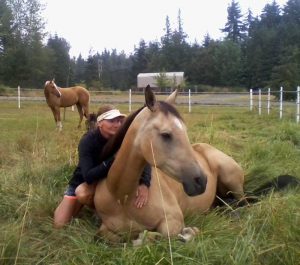 Sheila and Charlie Kerrian thoroughly enjoy their cross-country road trips, and besides taking loads of photos of the breathtaking landscapes, have met some truly intriguing people in law enforcement. There was the newspaper owner/editor Ava Logan; the psychic puzzler, Lexi Sobado; the 1880s midwife, Rose Carroll; the vegetarian detective, Becky Greene; and the time traveling sheriff, Will Denton – an eclectic bunch of crime fighters to be sure.

This trip was all about seeing the Pacific Northwest. Sheila’s parents had lived in Tacoma, Washington, for a while and spoke fondly of their time in the area. The plan was to fly out to Seattle, stop in as many coffee shops as they could (Charlie ran out of time well before running out of coffee shops to visit) and then travel by rental car through Oregon and on to California. A break in the drive in the middle of Oregon’s majestic scenery took them to the Cascade Kitchen.

“Twenty-seven hundred miles from home, Charlie and Sheila marvel at Oregon’s land between the Cascade Mountains and the high desert. Traveling through the central part of the state showcases the transition of coastal fir, spruce and cedar giving way to pine and sage. Black-ribbed buttes thrust out of the sandy loam. The last road sign announces their entry into (fictional) Butte County.

Hunger calls and they pull off the two-lane highway in the pokey little town of Cowdry where they find an unlikely-looking diner called the Cascade Kitchen. Farmland abuts the back of the truck-choked, gravel parking lot. A gleaming red horse stands at the hitching rail. Yes, there’s a hitching rail behind the diner and this horse’s reins are loosely swirled around the thick wood crossbeam. The animal seems perfectly happy to wait there, head low, eyes half-closed, one hip cocked. Maybe the restaurant offers oatmeal to go, perhaps with extra brown sugar.

Inside, garden variety décor screams mere diner, with a wooden sign suggesting they seat themselves. The vinyl booths are dinner-rush-full, but wow—at the first table, a good old boy in overalls and a baseball cap bearing the John Deere emblem is ripping into a ruby red bell pepper with fork and knife. Wild rice, sugar snap peas, and sausage spill out. Stuffed peppers in a diner!

Two seats are open at the lunch counter next to a young woman in jeans and a flannel shirt.

Why is she biting into a hamburger when better food is served here? Charlie and Sheila wonder as they climb onto the last available twirly stools.

The young woman makes eye contact via the mirrored wall facing the lunch counter, then turns to face them.

“You’re new here. Are you moving in? D’you have horses?” She pulls a business card from her shirt pocket and slides it down the counter in front of them.

Sheila and Charlie inspect the card together.

A chuckle erupts from the uniformed deputy on the other side of the young woman. Charlie and Sheila look at the mix of people sitting on Rainy Dale’s other side. Two uniformed deputies, a middle-aged man with a crew cut and a young woman with a tight French braid who looks about Rainy’s age, probably young twenties, are finishing their plates. The chuckle came from the male deputy, who nods and says, “She thinks she’s a horseshoeing detective.”

A ponytail keeps Rainy’s long brown hair out of her plate as she leans forward and uses both hands to stuff the last bite into her mouth. She looks at Sheila in the mirrored wall and nods.

Charlie reaches for the laminated menu. One burger option is local, grass-fed beef.

A tall, blond young man in a chef’s shirt comes through the swinging doors from the kitchen, plates in each hand. “A sample of blackened spears of butternut squash drizzled in maple-infused vinegar.”

Rainy smiles and wrinkles her nose.  “Guy, that looks and sounds suspiciously like vegetables.”

Charlie studies the man’s uniform—it’s slightly different from what the woman is wearing. The man’s shoulder patch reads Deputy above the shield, Butte County below. The young woman’s sleeve has two lines above the cloth badge. Reserve Deputy.

The horseshoer and the reserve deputy give each other the stink eye in the mirror. What kind of ire lurks between them?

Guy, the cook, fires up a tiny butane hand torch that hisses as he caramelizes sugar on a small, perfect-looking crème brulée. The scent of browning sugar wafts over them, making Charlie and Sheila think of eating dessert first. Guy carries the dessert to the man at the first table.

Charlie wonders how many homicides the deputy has investigated.

“How many sworn officers are in your Sheriff’s Department?” he asks over Rainy’s head.

(This is how law enforcement officers compare department size—by the number of sworn and non-sworn employees.)

The regular deputy nods as though recognizing he’s likely talking to a brother officer. “Twelve deputies in a county of seven thousand square miles. About as many people as square miles.”

Charlie whistles. “That’s not really enough personnel for full twenty-four-hour coverage. How do you patrol that much land with so few deputies?”

The deputy jerks a thumb to the young woman seated beside him. “With reservists like her.”

The reserve deputy quits making faces at the horseshoer and sips her soda.

This is the modern American West. More going on than would appear at first glance. Maybe Charlie and Sheila will stay a night or two.”

Many thanks to Lisa Preston for stopping by and introducing Rainy Dale, horseshoer, to the Kerrian’s Notebook readers. Rainy is a truly original voice, with a talent for sizing up people and their horses. Horses kick and people get dead around her, but….. 🙂

Click on the link and let Rainy tell her story in “The Clincher.” 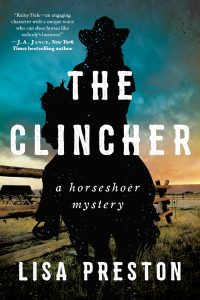 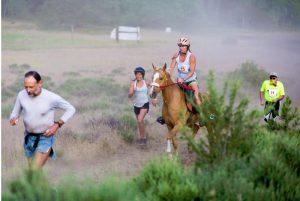 “The Clincher,” is the debut novel for Preston’s Rainy Dale horseshoer series. An important scene in the book mentions a practical application of the sport of “Ride & Tie,” and the photo above shows Preston competing in a real life Ride & Tie race. Although her experience and love of horses and other animals did not start out to be research for any of her books, the knowledge gained throughout her globetrotting life flows richly on the pages. 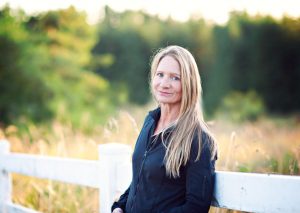 Lisa Preston began writing after careers as a fire department paramedic and a city police officer. She was first published in nonfiction, with titles on animal care, such as The Ultimate Guide to Horse Feed, Supplements and Nutrition. Her debut novel, Orchids and Stone, (Thomas & Mercer, 2016), has been described as a book club thriller, or domestic noir. Her psychological suspense novel, The Measure of the Moon, (Thomas & Mercer, 2017) was also a book club pick. The Clincher (Skyhorse Publishing, 2018) debuted her mystery series featuring a young woman horseshoer. She lives with her husband in western Washington.

Please visit www.lisapreston.com for links to her bestselling books and more about this multi-faceted author of both non-fiction (animals and their care) and fiction.